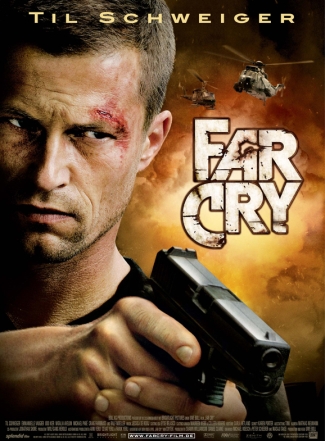 There is nothing worse than picking up a book, movie, whatever, expecting to be entertained based on the cover. The above example is the movie Far Cry, starring Til Schweiger, in what looks like a cool action flick. The description even makes you look past the fact that this is a video game adaptation, promising a slick action-eer:

An ex-special forces soldier turned boatman is hired by a journalist to investigate a top-secret military base on a nearby island.

The problem with this packaging is that this is a film by Uwe Boll. Til Schweiger is a fantastic actor and a major box office draw card, especially in his home country of Germany. He was also the driver behind one of my favourite films of all time, Knocking on Heaven’s Door. Yet not even Til can save us from the worst director of all time.

One of the things that amazes me about Uwe Boll is not so much the fact that he is still making films (petition to stop him making films) but the fact that he is able to attract the money and star power to his movies. You would think that actors would be keen to avoid working with Uwe so that they don’t sign a career death note. But Til, Ron Perlman, Burt Reynolds, Jason Statham, Ray Liotta, Eric Roberts, Christian Slater, Stephen Dorff, Claire Forlani, Leelee Sobieski, John ‘Gimli’ Rys-Davies, and Ben Kingsley (although, Kingsley may be an Oscar winner, but he has appeared in some truly awful films), have all lined up to appear in a Uwe Boll production. Why!?! Rys-Davis has implied that the money is good and Uwe is easy to work for. No mention of exactly how good Uwe is to work with; I’m going to assume running hot and cold hookers and blow.

This speaks to the underlying problem with picking good entertainment. We can be easily mislead with a cool blurb, impressive trailer, a spot at the front of the store, a stand that tackles you to the ground and forces you to buy the movie/book. It is why movie stars are paid big money, because they have a brand that audiences recognise, and that can guarantee box office sales. In publishing you have name brand authors like James Patterson occupying the front of the store because they are reliable bestsellers. And Lee Child was recently shown to have the strongest brand in publishing, with fans following him from book to book more than any other author, because of his reliably entertaining books. Uwe Boll is the opposite of this brand of success and reliability.

Essentially media consumers like us are less likely to try a new author, or watch a film by a new director, or one that stars actors we haven’t heard of, because of the Uwe Boll’s of this world. We want our entertainment to be entertaining – I know, not much to ask really – and we hate being mislead by slick tricks. We see a cool poster or cover, we see a big name actor attached, or read a cool blurb, only to be sorely disappointed. So instead of trying something new, we stick with what we know and trust.

I guess that is why I promote books I’ve read and liked on this site. That is why we need people to review books, movies, TV shows and music. That is why we need to find people with similar tastes to make recommendations to us. If we can’t stop Uwe Boll making films, at least we can tell people about the films that are worth watching.

One thought on “Misleading packaging: why reviews matter”