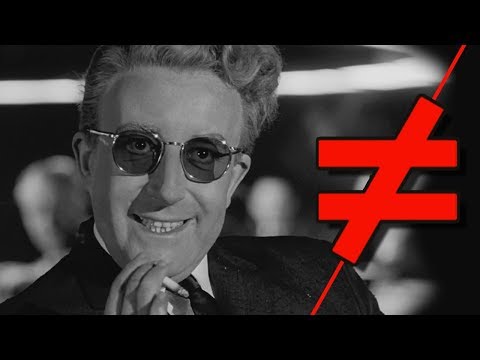 This month’s What’s the Difference? from CineFix delves into one of the few Stanley Kubrick films I’ve enjoyed.

Everyone remembers Dr Strangelove but very few remember Red Alert, the novel that was the basis for Kubrick’s adaptation. Peter George’s book was an early nuclear war thriller and having got there first tended to be copied (or is that emulated?) by many other authors. This was an important point since Kubrick and George decided to sue the production of another movie based upon a nuclear war thriller that was deceptively similar to Red Alert. I’m not exactly sure why this was important as George teamed up with Terry Southern to change the super-cereal novel into a timeless satire.

Did you know that Dr Strangelove was originally going to end with a pie fight? Apparently, the farcical element involved in that was deemed too silly for a poignant satire, despite how metaphorical it was to the destruction of the human race. I guess many would have missed that point. Comedy needs to take itself more seriously if people are to get the point.

I think Dr Strangelove is a great example of a movie being better than the book. The way it does this is by not taking the source material seriously. What would have been another by-the-numbers thriller was elevated by satirising war. Landing not long after the Cuban Missile Crisis, the film managed to capture sentiments of the absurdity of mutually assured destruction and the ineptness of the cabals of military and political elites deciding fates.

4 thoughts on “Book vs Movie: Dr Strangelove – What’s the Difference?”