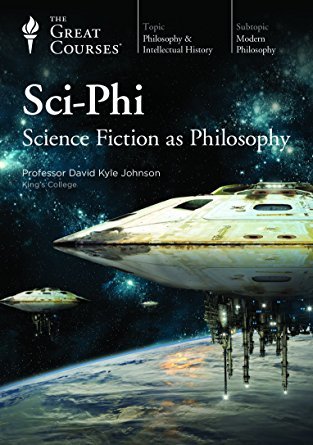 Sci-Phi: Science Fiction as Philosophy by David K. Johnson
My rating: 5 of 5 stars

Science Fiction as Philosophy is a Great Courses series in which each lecture uses an example sci-fi movie or show (plus a few supporting examples) to discuss a philosophical concept. This illustrates both the depth of sci-fi and creates a starting point to draw various philosophical ideas together. David K Johnson presents this broad-ranging series.

The audiobook/lecture series is much like the rest of the Great Courses and includes course notes. The notes book in this instance is presented as a lot of dot points – I don’t remember this being the case in other Great Courses. It was incredibly handy for doing the lateral reading.

This was a fantastic series. The lecturer was able to cover a lot of material in a concise and accessible manner. Johnson also managed to retain a sense of humour that was entertaining in what could have been dry and boring subject matter.

It was great to revisit so many of my favourite sci-fi movies and shows to discuss them with a philosophical eye. This was generally well done and interesting. The deeper insights were not necessarily surprising to sci-fi fans but I generally found a bit more depth to the material here than in the usual pop-philosophy discussions.

That said, there were times where the lectures felt like the cliff notes of philosophy, which isn’t that surprising for something covering a lot of ground. For some topics, I noticed that material was a shortened version of things like the Stanford Encyclopedia of Philosophy. So this could feel a bit light on if you are familiar with the philosophy being discussed.

Overall, I really enjoyed this Great Courses series and want to dive into some of the other series David K Johnson has made.

Comments while reading:
Lots of great material and subject matter. Highlighted a few of my old favourites, like The Thirteenth Floor.

I have so many issues with the Simulation Hypothesis and 20% chance figure. Personally, I think we should dismiss it in much the same way we dismiss the Devil’s Veil, Brain in a Vat, Matrix, and other similar ideas. Materialism is a much better explanation, as discussed in a previous lecture/chapter.

My main issue with the idea is that the probability matrix and reasoning are essentially Pascal’s Wager (which is predated by several other versions). The problem is that you can use this reasoning to justify just about anything. Replace belief that we’re living in a simulation with belief in magic or god or superman or evil superman or the free market. Nonsense can be granted a “logical” and “rational” foundation which could then be used to justify atrocities – e.g. you could justify killing people because it’s only a simulation.

Pascal’s wager: Believing in and searching for kryptonite — on the off chance that Superman exists and wants to kill you. https://rationalwiki.org/wiki/Pascal%…

The section on militarism vs pacifism vs just war is a little disappointing. It starts strong with the castigation of militarism. The pacifism is covered reasonably, the best bit being the dispelling of the idea of pacifism being about just rolling over to violence rather than finding non-violent ways to address violence/militarism. But then Johnson kinda falls prey of several ahistorical factors and militaristic ideas in being critical of pacifism. Which leads into just war as some sort of compromise between the two.

I disagree here. I’d argue that just war isn’t a middle ground but instead a justification for militarism through a pseudo-intellectual justification. Take any of the given requirements of just war and you won’t find a single war (or conflict) that meets the criteria. Even going historically (it’s meant to be used prior and during) you have to be pretty selective in your cherry-picking to get things to fit. E.g. Hitler and the Nazis were bad, so WW2 was all good… well, except the conditions for WW2 were sown at the close of WW1 and could have easily been avoided, the war supplies to Germany could have easily been closed (although that would have stopped the US companies making big $$ from the Nazis), and the Nazis party could have not been internationally endorsed. In other words, the only reason you can meet Just War is if you turn a blind eye for a couple of decades and wait for atrocities to start happening and use those as a post-hoc reason to go to war (they didn’t know about the atrocities until after going to war).

There’s nothing like being reminded of how terrible Robert Nozick’s philosophy was/is. “Rawls was wrong because people earn stuff, even when they cheated or got lucky, and most actually get lucky, BUT THEY EARNED IT DAMMIT!!”

I think Johnson is way off the mark on the luke-warmerism of Snowpiercer. I’m not sure if this is just a really bad take on his part or if he is unaware of the arguments around geoengineering solutions to climate change. Probably a bit of both. Point being, geoengineering is seen by its critics as offering similar unforeseen consequences as the burning of fossil fuels. This means Snowpiercer exists in a world where delay by the powerful required hubristic action that once again disproportionally impacted the poor. Maybe the problem is that Johnson was trying to discuss something fresher, since Snowpiercer has been written about quite a bit from the class struggle perspective, and was trying to fit within his lecture structure.