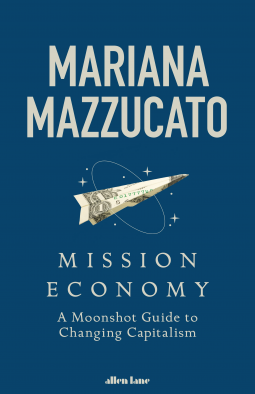 Mission Economy: A Moonshot Guide to Changing Capitalism by Mariana Mazzucato
My rating: 3 of 5 stars

Mariana: Change for the betterment of all.
CEO: But will I still make a huge bonus?

Mission Economy continues Mariana Mazzucato’s writing on addressing the neo-liberal failures that have seen the importance of government to our economy sidelined. She uses the example of the mission to the moon for how government drives innovation, economic expansion, and aids private industry in direction. And from this, how a new mission could address the problems wrought by neo-liberal/crony capitalism (e.g. climate change, growing inequality).

After having read The Entrepreneurial State and The Value of Everything I was excited to read Mission Economy. But after finishing it, I was left feeling a little underwhelmed.

I think this lack of whelms is from two factors. The first is that this is a continuation of Mazzucato’s previous two books. This isn’t a bad thing but it does feel like another version of the same arguments without much new material. If this had slightly more “meat” to the argument I’d have probably enjoyed it more.

The second reason is the idea of Reform or Revolution? Mazzucato is essentially arguing to reform our current capitalism with better capitalism. But standing in the way of that are all the people who made all the money with the current state of affairs. So how do you do this reform without revolution? Her argument is to have a rallying “mission” to address the big issues, but we have seen that blocked already.

So her argument, whilst not wrong or bad, needed more fleshing out as to how to overcome the blockages. What was going to be the revolution or reform that would do this? And why reform over revolution? The book would have been much stronger for this point.

On a side note, I know the moon mission was the example being used to underline the thesis of the book… but… the Kennedy love and moon example got a bit repetitive and thinly stretched.

Overall, this was a solid argument from Mazzucato and worth reading. Hopefully, we will see a mission to address some problems in the coming months and years with governments leading the way.

Comments while reading:
“The wrong question is: how much money is there and what can we do with it? The right question is: what needs doing and how can we structure budgets to meet those goals?”

This has been a common theme from a lot of more progressive political and economic texts/essays in the last decade or two. And yet, the message still doesn’t get through. Mainly because people still think of the economy as a household budget rather than an investment portfolio.

The revised Kennedy quote as a rallying call to fix current issues is a good one. But it does show how more nebulous issues, like the environment, health, climate change, are harder to set a clear outcome or goal for.

Mazzucato does talk about this a little, but I feel that it doesn’t quite capture how hard goals are easier to defend. “We’re going to beat the Ruskies and put a [man] on the moon first” is an easier target than “We have to all join together and stop burning fossil fuels so that the planet doesn’t warm beyond 1.5 degrees above pre-industrial levels”. What’s the win with the second idea, is the goal not burning fossil fuels or just not too much, is the warming 1.5 exactly, what were the pre-industrial levels, why is this important, will there be sandwiches?

One thought on “Book review: Mission Economy by Mariana Mazzucato”