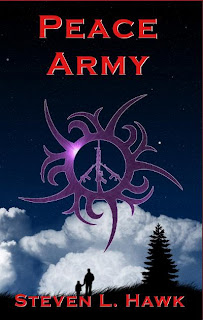 What I love about the digital age we now live in is that it has suddenly made communities possible again. All those little sullen teenagers who make statements like “life is pain” can now find other people to bother. For readers and writers it means that, like a readers festival, we can gather in corners of the internet and proudly proclaim “I can read and I actually enjoy it!”

This means that now authors can speak to a writer’s group from the comfort of their own couch. Or they can speak to fans directly without having to wait for a book tour or festival. Writer’s can now grab some readers and ask them “Is it good enough?” and they can tell them “Yay!” or “Ow, my brain!”

I have previously mentioned how I stumbled across Steven’s first book here. Well, when I congratulated him on his first book in an email, he suckered me into being a Beta Reader. By suckered I mean he offered me a free copy; by Beta Reader I mean I got to read it before anyone else!

Now normally a traditionally published author would have a team of publishing house people take a large cut of their book sales in order to tell them to rewrite it so that it is a teenage vampire romance novel – because they are hot right now. But in the world of the indie author, or is that the e-book author, no one can afford to end up co-writing with James Paterson. They have to find ways to turn out a quality product with as few costs as possible. Of course some authors aren’t concerned with things like spelling or grammar, and just release a book. True professionals, like Steven, wouldn’t dream of releasing anything but a professional quality book.

Once again we find ourselves in touch with our peers. Instead of it being because we all live within a day’s horse ride of one another, now it is because the internet has connected us. Authors can help other authors. Fans can be friends with their favourite authors. Sure, you still get the annoying argumentative people who think ignorance is an opinion, but that is why the internet invented pwnage.

Now my experience in being a Beta Reader has been very positive. By the time I had a copy in my Tablet PC it was clear that Steven had done a lot of work on the novel – Peace Army. I actually spotted less typos, grammatical errors and spelling mistakes in his entire novel than in the middle section of the final Harry Potter novel (you know, the part were Harry, Ron and Hermione are wondering around camping for ages and you wonder when something will actually happen, but nothing does). Since Steve was still sending this book to an editor, myself and the other Betas were tasked with trying to spot plot holes, non-sequiturs, and frivolous inclusions of zombies. I really have to commend Steven on a novel that could have been something I was paying for, not reviewing.

This revival of an ancient (pre-2000 AD) practice is not without its problems. Without going into too much depth, I am actually a professional editor and have a few science degrees – some of them are from real universities! So not only have I been asked to rewrite entire articles that consist of the 7 words you can’t say on television, but I’ve made it coherent. So it is likely that I can contribute something of value as a Beta or editor. As a result I think that authors need to still be reliant on doing a good job themselves, finding Beta’s who can give positive criticism of value, and not be in too much of a rush to publish.

Of course I should offer up a few comments on Steven’s book. Peace Army is an interesting follow-up to the novel Peace Warrior. Once again Steven has hearkened back to the science fiction novels of old, while having an interesting take on a future Earth. The last third of the novel flew past and I had to remind myself to make notes as the book came to its finale. Even if Steven released this book right now without further changes and editing I’d not only be buying a copy myself but would recommend it for anyone who loves sci-fi. Keep an eye out for its release.

All just a little bit of history repeating: