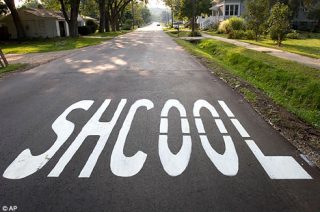 There is nothing better than picking up a book, newspaper, or turning to a blog post, that is full of typos, spelling errors and grammatical mistakes. If you need hours of entertainment I highly recommend playing “Spot the Error”.

Now I can’t claim to be an expert in all things writing, so instead I have found this great article from Mike at the Book Making blog to help.

A lot is two words, not one.

Believe follows the old “i-before-e except after c” rule. However, foreign, forfeit, sovereign, surfeit, caffeine, casein, codeine, either, geisha, inveigle, keister, leisure, neither, protein, seize, sheik, and Sheila do not.

Bellwether has nothing to do with the weather. A “wether” is a castrated sheep or goat that wears a bell and leads a herd. The lack of cojones made it less likely that the leader of the pack would stray.

Cannot v. can not: “Cannot” is a word, one word. Some word mavens insist that it is not supposed to be split into two words. This is weird, because “can” and “not” are legitimate words. I won’t be pissed off if you can not go along with “cannot.”

Cemetery does not end in “ary” or begin with “s.”

Changeable, unlike argument, retains its “e” so you know the “g” is soft, pronounced like “j.”

Collectible is not “able.” No rule applies here, just memory.

Coolly has a double “l” when it’s not a noun. When it is a noun, it’s spelled “coolie.”

Criteria v. criterion: Confusing these two nouns is a common error, even among highly educated people. “Criteria” is the plural of “criterion,” but many people aren’t even aware of the word “criterion.” If you’re discussing various requirements that must be met, use “criteria” but if you are writing about one major requirement to be met, use “criterion.” (During Sheila’s many years as a technical writer, one of her colleagues — an English major who graduated from a top college — was working on a software users’ manual that dealt with various criteria. But, when this writer referred to one criterion, she continued to use “criteria.” How did she graduate, especially as an English major?)

Deceive does obey the “i before e except after c” rule. So does receive, but not frequencies or science or species.

Drunkenness should have a double “n” when spelled by so­ber people.

Epic is a big important book, poem, or movie. Epoch is an im­portant era. You can write an epic about an epoch.

Exceed does not end with “cede.” Nothing exceeds like excess.

Existence does not have an “a.”

Flier is someone who flies (not “flys”). It’s also a leaflet, or a golf ball that goes too far. Airlines frequently say “frequent flyer.” They’re frequently wrong.

Flyer can be part of a proper name for transportation (“Radio Flyer,” “Flexible Flyer,” “Rocky Mount­ain Flyer”) or a sports team (“Philadelphia Fly­ers” and “Dayton Flyers”), or even sneak­­ers (“PF Flyers”).

Gauge is a verb or a noun with a silent “u.” For the thickness of wire or metal, or the space between train rails, or the size of a shotgun, you can ditch the “u.” Gouge means to scoop, dig, swindle, or extort; or a tool for gouging.

Grateful has just one “e.” It’s not so great. It has the same root as “gratitude.”

Harass has just one set of double letters.

Inoculate has no double letters.

Jibe (NOT Jive) means to agree. Jibe and gibe mean to taunt. Jibe also means to move a sail to change direction.

Layout is a noun. Lay out is a verb. A designer will lay out a layout.

Lightning is the spark in the sky, or part of the name of Lightning Source, the printer of this book. Lightening removes weight.

Maintenance has just one “ain,” unlike “maintain.”

Maneuver is a French-ish word, that’s easier to spell than the British version: “manoeuvre.”

Medieval refers to the MIDdle Ages, but is spelled more like “medium.” Some of those wacky Brits use “mediaeval.” (TA note: Brits founded the language they are more likely to be right)

Memento reminds you of a moment, but the first vowel is an “e” not an “o.” Don’t ask why; just remember it.

Minuscule means mini, but it’s spelled more like “minus” (except when it’s being spelled by people who prefer “miniscule.”) Pick one version, and be consistent.

Misspell is frequently misspelled. It needs a double “s” but no hyphen.

Noticeable gets a silent “e” to keep the “c” from being pronounced like a “k.”

Occasionally has a double set of double consonants.

Occurrence has two traps: the occurrence of double double consonants, and “ence” not “ance” at the end.

Pharaoh uses the “a” twice.

Plenitude is right. Plentitude is wrong, but is used a lot.

Principal is a school’s boss or the most important element of something. A principle is a rule or an important point.

Privilege is not edgy. It has no “d.”

Reevaluate does not have a hyphen. (TA note: my spell checker doesn’t agree. Don’t trust your spell checker!)

Relevant is not “revelant,” “revelent” or “relevent.”

Separate has an “a” as the second vowel.

Sergeant, unlike the affectionate “Sarge,” has no “a” up front, but it does have a silent “a” later on.

Sleight of hand is a group of techniques magicians use to secretly manipulate objects. It’s not “slight of hand” or “slide of hand, “Sleight” comes from an Old Norse word for clev­erness, cunning, and slyness.

Supersede is not spelled like “succeed” or “precede” and may be the only “sede” word we have.

Threshold does not have a double “h.”

Weird is weird because it breaks the “i before e except after c.” rule. Seize is weird, too.

This, of course, ignores all the fun that can be had with the incorrect way that Americans spell words like neighbour (neighbor), centre (center) and metre (meter – in fairness the Americans do prefer to crash billions of dollars worth of scientific equipment into Mars rather than use the metric system).

Thanks again to Mike at the Book Making blog.