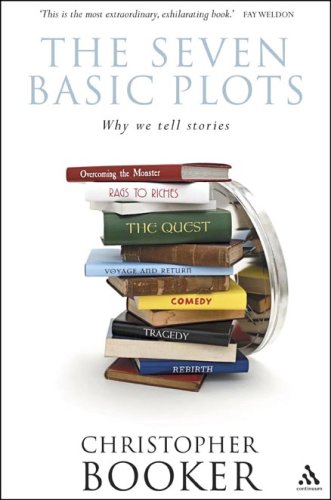 A friend made the comment to me recently that a film we had both watched was merely a rip-off of another film. Rip-off is a bit harsh in my opinion. If we think hard about all the books and films we’ve ever watched and then break them down into their general plots you start to see a lot of patterns. Boy meets girl. Girl meets boy. Buddies team up to do something awesome. Odd couple team up to do something awesome. When all said and done, it is hard to identify anything truly original.

As a result, people often say that there are only a certain number of basic plots and that any story is really just a variation on these plots. Depending on how detailed they want to make a “basic” plot, different writers have offered a variety of solutions. An article I found lists these:

Attempts to find the number of basic plots in literature cannot be resolved any more tightly than to describe a single basic plot. Foster-Harris claims that all plots stem from conflict. He describes this in terms of what the main character feels: “I have an inner conflict of emotions, feelings…. What, in any case, can I do to resolve the inner problems?” (p. 30-31) This is in accord with the canonical view that the basic elements of plot revolve around a problem dealt with in sequence: “Exposition – Rising Action – Climax – Falling Action – Denouement”. (Such description of plot can be found in many places, including: Holman, C. Hugh and William Harmon. A Handbook to Literature. 6th ed. New York: Macmillan Publishing Co, 1992.) Foster-Harris’ main argument is for 3 Plots (which are contained within this one), described below.

Foster-Harris. The Basic Patterns of Plot. Norman: University of Oklahoma Press, 1959. Foster-Harris contends that there are three basic patterns of plot (p. 66):

Polti claims to be trying to reconstruct the 36 plots that Goethe alleges someone named [Carlo] Gozzi came up with. (In the following list, the words in parentheses are our annotations to try to explain some of the less helpful titles.):

It is therefore inevitable that it is all just a little bit of history repeating.

6 thoughts on “History Repeating – The 7 Plots”