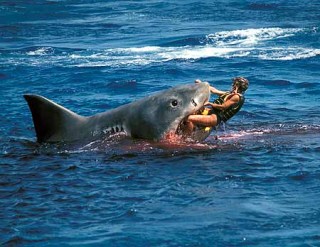 I don’t normally comment on current affairs or the news in this blog, because normally the news can be summarized as: war, death, famine, kitten in tree, sport. Of course that is the 24 hour news channel version, the network news shows are more along the lines of: human interest, war, kitten in tree, tragedy, dog puppy in tree, sport, sport gossip. But this news is somewhat baffling.

Apparently Western Australia is going to have a shark cull in an effort to try and kill a white pointer believed to have killed three people recently (article here). 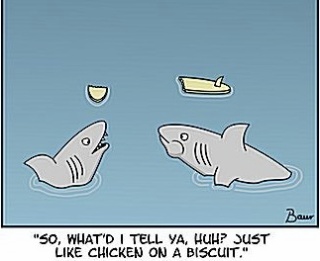 Not too difficult to understand is it? Three deaths in a short amount of time when the world averages 5 deaths per year is something that people start worrying about. What is baffling though is that we are concerned about 3 deaths. People are 300 times more likely to drown than die from a shark attack in Australia. Or put another way, if you wanted to get rid of that jerk at work, you could save the expense on the shark and just use water (see this article on sharks and risk).

Last time I checked the Great White Shark was an endangered species and humans are at near plague proportions, especially Americans – the shark’s favourite food. Sixty one percent of the world’s shark attacks are in North America and American’s are making popular shark food in Australia as well. See the big mistake here is that sharks keep mistaking Americans for food.

Now I’d be the first to admit that Americans are very tasty, something has to come of that high fat and sugar diet. But what we really need to do is help Americans to stop looking like food. Is it just that Americans are tastier than the rest of the world’s people? Is it genetic? Or are is it just that the people who were attacked by a shark looked too much like a seal? Either way it is clear that the worry over sharks is more about them not being cute enough, maybe Spielberg should do a revised Jaws movie that focuses on the danger of mosquitoes: When you hear them buzz, you’re DEAD!