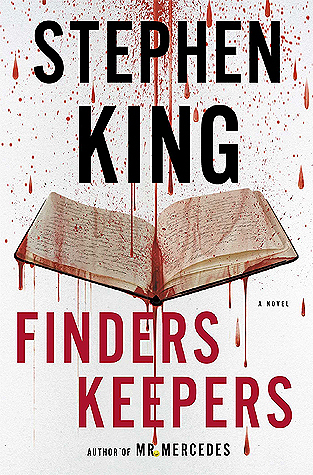 Finders Keepers by Stephen King
My rating: 3 of 5 stars

Enter a world where people obsess over books that aren’t Harry Potter. Of course it is a fictional world.

Peter Saubers’ family is having a tough time of it. The GFC has hit hard, his dad was hit hard with a car, and the arky-barkies might tear the family apart. Then he stumbles upon a literal treasure chest: stolen money and notebooks from the late John Rothstein – a reclusive author in the mould of JD Salinger. Of course, the man who killed for those notebooks, Morris Bellamy, has a wee fixation on Rothstein and his character Jimmy Gold, so not even a life sentence will stop him coming for Peter Saubers and his treasure.

I’ll be honest, I was going to give up on this book. If it hadn’t been written by Stephen King I probably would have. This is the second novel in the Bill Hodges trilogy, and Bill doesn’t show up until a third to half-way through the novel. That is part of what makes this novel frustrating. It takes a long time to set things up and get the plot moving, with that first third or more acting as back story that you’re not quite sure has a point to it.

But the final third of the novel redeems this ignoble start in a taut and suspenseful manner. Definitely not one of King’s better works, but if you can get past the waffly back story, this is an okay read.