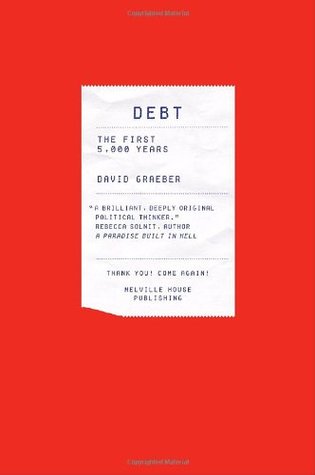 Invent money so you can take it off of people… Ingenious?

Debt: The First 5,000 Years is a comprehensive dive into the history of money, credit, and society/economy. It acts as a direct refutation of the commonly taught economic ideas about money and exchange systems that make up our economies (past and present). In doing so, Graeber draws on countless examples, historical evidence, and anthropological research to outline the major flaws with our current economic system.

This book was a very important read. It doesn’t just overturn many assumptions, it shows how those assumptions are taught as fact to perpetuate our current system. But probably the most important point Debt makes is that our current system doesn’t fully account for the human economy which means it will ultimately fail and we need to replace it with a system that does account for everything.

That said, at about halfway through Debt I found myself starting to wave my hand for Graeber to move it along a bit. At two-thirds, I was signalling for him to wrap it up already. Having read several of Graeber’s books and essays now, I feel Debt was his most important but also most meandering. In some ways, it reminded me of Das Kapital in this respect.

I fully expect this book will be ignored by economists, with fists firmly shoved into ears. You should probably read it though.

Comments while reading:
I’ve heard the barter (myth) explanation so many times. But now that I’ve read some examples of where that isn’t used, or is used quite differently from what we conventionally are told happened in the past, you realise that its pretty much a whole-cloth nonsense. I mean, who’d have thunk that sharing would have been common among our ancestors? It’s still common today when things go pear-shaped. So bloody obvious.

MMT explainer on the creation of money. Having read about MMT (Modern Monetary Theory) in Stephanie Kelton’s book, seeing it used here only reinforces both texts. Someone needs to create a market, hand out credit and demand a proportion be repaid. Goods are exchanged. Eventually, money turns up as an accounting measure.

Interesting side note about the Hindu philosophy of Nyaya that rivals pre-Socratic philosophy. It has an interesting idea about how logic shouldn’t be doing a content-independent “formal language” but instead incorporating logic with content in the language of the philosophy. They also independently came up with atomism. Funny how we don’t hear Nyaya discussed but we are hammered with “western philosophy”. https://en.wikipedia.org/wiki/Nyaya

Two-thirds through and I’m signalling for Graeber to wrap it up. I understand that when overthrowing orthodoxy you’re going to have to show your work… but I kinda feel like the point could have been made in a few hundred pages less.

Summary: the orthodox view of money and the economy is wrong. It doesn’t correctly understand nor value the entirety of our human economy, which is more correctly a credit system. The credit system is actually how our society works, thus we have to move our economic system to one that utilises this. Essentially, mutual aid and trade. The evidence for this is seen in every community, every time there is a disaster, and throughout history. /end.