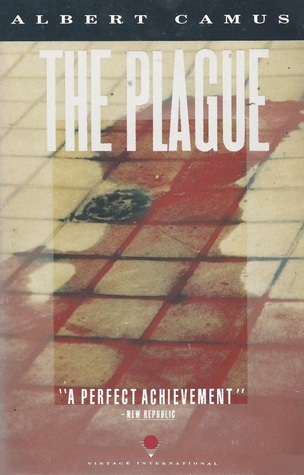 The Plague by Albert Camus
My rating: 3 of 5 stars

Can’t think why this book is currently popular again.

In the town of Oran, Dr Bernard Rieux notices rats are starting to die in their thousands. When his building concierge dies suddenly, Rieux urges the authorities to act on what appears to be the early stages of a plague. Obviously, they listen to him and the book ends there. Or more accurately, the plague takes hold of the town and people start dying in their hundreds. Rieux and his friends try to help the best they can.

I’ve read very little of Camus’ philosophy. His most famous contribution is “There is only one really serious philosophical question, and that is (whether to commit) suicide” which is a tad offputting. I’m sure the guy pushing the rock up a hill would agree with me on that.

But after watching a recent video from Carlos Maza, I decided to give The Plague a read.

In many respects, The Plague captures most of Camus’ philosophical arguments in a narrative form. It is also widely acknowledged as a WW2 allegory, specifically around the underground resistance movement against the Nazis. And the reason it is getting a lot of interest currently, aside from its title, is how much of the events of the novel sound painfully familiar.

Not that this novel is prophetic so much as an account of humanity. Which says a lot about how much we suck at learning from our mistakes.

Much of The Plague had me thinking of Camus as the failed writer doing philosophy. There’s a dry and detached style to the writing that is at odds with the story being told. And as a philosophical novel, I thought it swung between poignant and pointless at times.

Although, as I said above, I was going in thinking of Camus’ work as a bit offputting. Not to mention, whenever I think of Camus I’m reminded of this comic:
https://existentialcomics.com/comic/180

The Plague is such an optimistic and timely book to read during a global pandemic.