Book review: The Time Machine Did It by John Swartzwelder 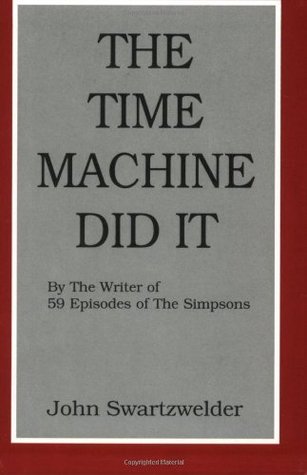 The Time Machine Did It by John Swartzwelder
My rating: 3 of 5 stars

Did we really need more of me to go around?

Detective Frank Burly is terrible at his job. But he is persistent. His new indigent client wants him to find a family ornament that will somehow prove that he is actually a wealthy upstanding member of the community. The sort with buildings named after his family. Frank doesn’t know where to start. And it soon becomes clear that he doesn’t know when to start either.

The Simpsons was heavily influential on me. It screened every evening, sometimes multiple episodes per night, to the point that I could probably quote jokes from just about every episode in the first 10 seasons. And John Swartzwelder was a huge part of that.

As stunning as it is to realise that The Simpsons is still running 25 years after the start of its decline, it’s even more amazing that I’d never picked up one of Swartzwelder’s books. And it was fine.

The Time Machine Did It is absurdist humour from start to finish. Jokes pepper the page in a way that most authors would dream of being able to write. Of course, most writers would also not lean quite so heavily into the absurdity as Swartzwelder in favour of a story that is more engaging.

This is an amazingly off-the-wall book, but the way the story is told and the type of humour does hold you back from really enjoying it. Too many of the jokes are just jokes rather than being part of the story. Other jokes that are part of the story create holes that Swartzwelder fills with more absurdity and jokes. E.g. I’m still not sure if the time travel joke about the old elevator driver becoming a 4-year-old in the same job is genius, dumb, or both. Either way, it was clearly the sort of joke you put in a visual medium and not a wordy one.

I see from the ratings that the Frank Burly series improves with each instalment, so I’m likely to read some more from Swartzwelder in the future.