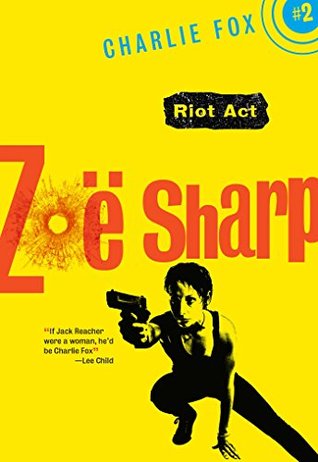 Those in council housing shouldn’t throw stones. Molotov cocktails are much better.

Charlie Fox is dog and house sitting in a rough neighbourhood for her friend. After some kids manage to seriously injure her neighbour during a robbery, a vigilante mob and a security group move into the area. Ulterior motives abound and Charlie is stuck in the middle of it all as the violence is let loose.

It has been awhile since I’ve picked up a Zoe Sharp thriller. After reading a couple several years ago I went on a spending spree, but haven’t gotten to them until now. I do enjoy reading a female lead thriller written by a female author. Zoe brings something very different to the story that you don’t get from her contemporaries in the genre – her writing has been compared to Lee Child, similar to how all comedy shows are compared to The Office.

Riot Act keeps the intrigue and action coming in steady measures. This was an enjoyable thriller.