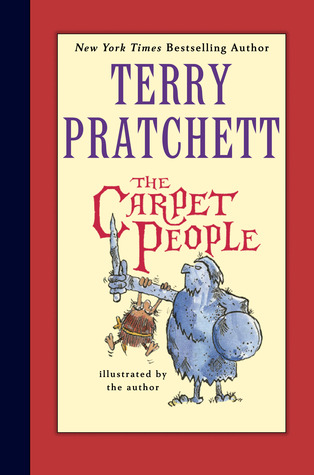 The Carpet People by Terry Pratchett

‘Don’t do that! You’ll disturb the carpet people.’

The Munrungs have just had their village destroyed by fray, a natural phenomenon from above The Carpet. In the aftermath, Glurk and Snibril try to help their village flee the attacking Mouls, a people who regard all others as animals and rather good eating. It is then they realise that fray is pushing a path of destruction through The Carpet and that the Mouls are attacking every city and town in its wake. Can they save civilisation so that people don’t go back to hitting each other?

While I was reading this novel I kept having to remind myself that it was the heavily revised edition written by the 40-something Pratchett, not the 20-something of the original edition. This was Pratchett’s first novel and as an ode to fantasy fiction had just the right amounts of absurdism and humour, which I can’t see a 20-something nailing. If Pratchett was this good out of the gate then every other author would be left weeping into the keyboard. Hopefully, someone who has read both versions can point out the differences.

This is, of course, not a Discworld novel. Apparently, all reviewers have to point this out for some reason. As such, Pratchett’s style, particularly his satire, is less pronounced here. While I thoroughly enjoyed reading The Carpet People, for long-time Discworld fans this may feel a little light or insubstantial. Or maybe they just feel guilty about having vacuumed their house.

2 thoughts on “Book review: The Carpet People by Terry Pratchett”