Book review: In Praise of Idleness by Bertrand Russell 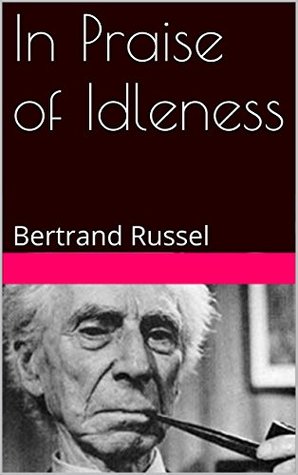 In Praise of Idleness by Bertrand Russell

“Work expands so as to fill the time available for its completion.”*

In Praise of Idleness is an essay written in between the two world wars and expands upon one of the points made in his Political Ideals essay. Once again, Russell manages to argue a challenging concept in an erudite and concise manner. Even if you disagree with him on the idea of work being overrated, there is value in engaging with what he is saying.

On inequality:
“Modern methods of production have given us the possibility of ease and security for all; we have chosen, instead, to have overwork for some and starvation for others.”
Variations of this statement are still being made today around inequality. They tend to use far more words.

On wasted efforts:
“Modern technique has made it possible to diminish enormously the amount of labour required to secure the necessities of life for everyone. This was made obvious during the war.** At that time all the men in the armed forces, and all the men and women engaged in the production of munitions, all the men and women engaged in spying, war propaganda, or government offices connected with the war, were withdrawn from productive occupations.”
I mean, could you be any more scathing of warmongering?

While I think he does make his argument well, there are some points that are taken as a given. The example of the wasted effort of war in the quote above is one of those. There is a valid point made about how society managed to function despite being asked to drop everything and fight a war, but the point about war being a waste of time and that standards of living were still okay just has to be taken as a given.

Worth a read, even if you disagree with Russell on some or all points.