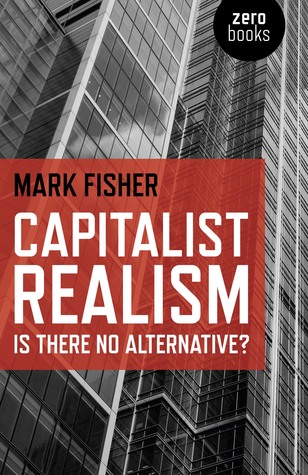 Capitalist Realism: Is There No Alternative? by Mark Fisher

You will be assimilated. Resistance is futile.

Capitalist Realism is a long essay or short book that argues we – as in Americans, but pretty much everyone on the planet – are so emersed in capitalism that we have no frame of reference for anything else. Mark Fisher argues that this both impedes our ability to reform or fight back against the worst aspects of capitalism, and/or to develop other socio-political societies. This is, of course, he argues, bad.

This was an interesting book. There were some truly eye-opening and enlightening moments where Fisher managed to capture an idea or concept in a concise and accessible way. He makes high-level critical analysis easy to read and understand, and not like an obtuse – or is that acute? – philosophy textbook.

It was somewhat less interesting when it drew upon pop-culture references. These references were often very good and served as a great way to make points or analogies. But some undermined any points being made by the very subjective interpretations and associations used. E.g. Kurt Cobain being the last self-aware musician was a little too reductionist. Trying to argue that Cobain could see himself being commodified and thus sought escape ignores so much of what made Cobain the person he was.

Then there were the Zizek references… and so on and sniff so on. I’ve only a passing knowledge of Zizek, but many of the philosophers I follow on social media have the same thoughts on him as I have. That is, Zizek is a sloppy thinker who gets distracted from any point he is trying to make and ends up chasing his tail around. To quote Chomsky: “There’s no theory in any of this stuff, not in the sense of theory that anyone is familiar with in the sciences or any other serious field. Try to find in all of the work you mentioned some principles from which you can deduce conclusions, empirically testable propositions where it all goes beyond the level of something you can explain in five minutes to a twelve-year-old. See if you can find that when the fancy words are decoded. I can’t.” Which, again, tends to undermine the points a bit, as it can be seen as selective and potentially misrepresentative.

Overall, this was fascinating. I think Fisher’s main points are worth serious thought and action. And at 80 pages, this probably needs to be read a few times.