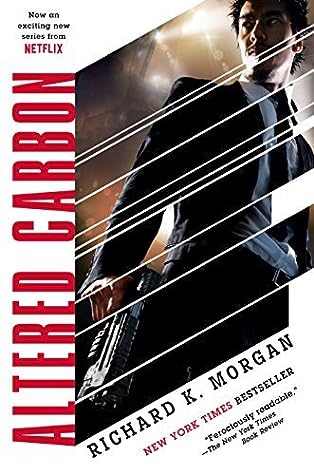 Takeshi Kovacs is a former elite soldier – Envoy – who becomes a criminal on Harlan’s World and has his body killed. Thanks to the technology of stored consciousness – via cortical stacks – he is revived on Earth to solve the body death of one of the richest men on the planet. The police think Bancroft committed suicide, the evidence suggests suicide, but Bancroft is convinced he wouldn’t kill himself after centuries of living. Kovacs starts treading through the underbelly of Earth and tries to discover if it was suicide or murder.

Altered Carbon has been on my TBR pile for almost a decade. My uncle recommended it again a few years ago, which got it bumped up the list. But, as with all TBR piles, it took a TV adaptation to get the novel read. I enjoyed the TV series, particularly on a second viewing. I’d say I enjoyed the book a similar amount but in a different way.

I commented in a blog post about the show that I enjoyed the themes even if the aesthetic was borrowed from Blade Runner. Kovacs in the show is a grumpier and more adept character than the novel. The show also has a more personal feel to many of the characters and makes the female characters feel less like a description of sexy body parts. Pretty amazing given the amount of nudity in the show.

What I think I liked most about the novel was one of the themes. Morgan expressed it like this:

“Society is, always has been and always will be a structure for the exploitation and oppression of the majority through systems of political force dictated by an élite, enforced by thugs, uniformed or not, and upheld by a wilful ignorance and stupidity on the part of the majority whom the system oppresses.” Source.

This resonated with me given the sorts of non-fiction I’ve been reading lately. Not to mention some of the things happening in the world these days… It made this hard-boiled cyberpunk novel very entertaining.

Well worth reading before or after watching the TV show.*

A couple of quotes related to that theme:

“Kristin, nothing ever does change.” I jerked a thumb back at the crowd outside. “You’ll always have morons like that, swallowing belief patterns whole so they don’t have to think for themselves. You’ll always have people like Kawahara and the Bancrofts to push their buttons and cash in on the program. People like you to make sure the game runs smoothly and the rules don’t get broken too often. And when the Meths want to break the rules themselves, they’ll send people like Trepp and me to do it. That’s the truth, Kristin. It’s been the truth since I was born a hundred and fifty years ago and from what I read in the history books, it’s never been any different. Better get used to it.”

“You live that long, things start happening to you. You get too impressed with yourself. Ends up, you think you’re God. Suddenly the little people, thirty, maybe forty years old, well, they don’t really matter anymore. You’ve seen whole societies rise and fall, and you start to feel you’re standing outside it all, and none of it really matters to you. And maybe you’ll start snuffing those little people, just like picking daisies, if they get under your feet.”