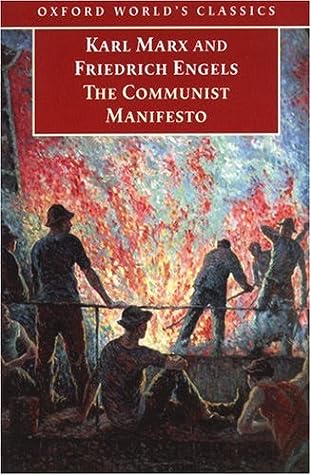 The Communist Manifesto by Karl Marx

The only thing you have to lose is your car keys. And chains.

“The ruling ideas of each age have ever been the ideas of its ruling class.”

The Communist Manifesto was part of my reading project to have some actual knowledge about the current bogeymen of cultural discourse. How could it not be? Various (sarcasm alert) intellectual giants, including Canadian self-help gurus and fake universities, have blamed Marx personally – poor Engels, always the bridesmaid, never the bride – and communism generally for every malady of the last 150 years. Obviously, they would know this after having studiously analysed the Manifesto… oh, and all of the hundreds of other texts on the subject.

What struck me about this text is how it captures a few essences of society, both then and now, with an insight that resonates. But it also manages to feel immature and underdeveloped compared to the later writings from Marx and Engels. From my further reading, this appears to be a common criticism.

There were interesting insights into women’s and workplace rights. These ideas from Marx and Engels’ have had to be implemented in our society. They realised that a capitalistic society couldn’t function the way it did. So those changes have been implemented. And it took social and union movements to make our society function, but not the communist revolution Marx and Engels expected.

Another interesting aspect was the definition of bourgeoise socialists. The idea of people advocating for small manageable changes to gradually improve society sounded an awful lot like centrist liberals or socially conscious millionaires/billionaires. They will admit the system is rigged and that it is unfair, but do you honestly expect them to sleep on less than 800 thread count sheets? Who is the real victim here?*

That isn’t to say there aren’t valid criticisms of the Manifesto. As an example, people like Sloterdijk have criticised Communism for channelling rage from their life in the direction of an “other” – in this case, the rich/capitalists. This rage is channelled by the ruling class of the communist movement and used to empower themselves. I.e. it becomes just another control mechanism, exchanging one oppressive power for another.

But it is clear from the Manifesto that this is/was not the intention. Something many critics miss.** Marx refused to speculate in detail about the nature of communism, arguing that it would arise through historical processes, and was not the realisation of a pre-determined moral ideal. Maybe this was a fatal flaw in his thinking, such that if he had been more prescriptive his writings wouldn’t have been used by authoritarian/totalitarian people to seize power.

There has been a lot of academic and scholastic work on Marxism since The Communist Manifesto. But this short work still remains a worthwhile read.

* See my review of Winners Take All.

See my review of Socialism a Short Introduction.