Book review: Sartre – Philosophy in an Hour by Paul Strathern 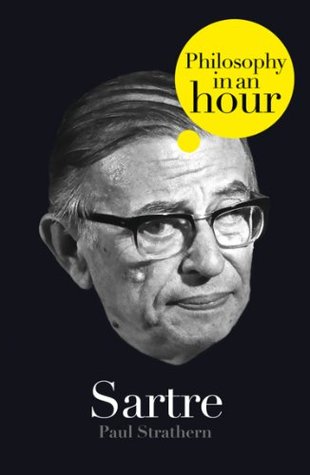 Sartre: Philosophy in an Hour by Paul Strathern

So little time to give meaning to life.

The Philosophy in an Hour series is written to give a brief overview of a philosopher’s life, some key points about their work, and a recommended reading list for more insights. This Jean-Paul Sartre instalment covers the famous existentialist, some anecdotes about his life, particularly as it relates to his open relationship with Simone de Beauvoir, and the barest of insights into his contributions to philosophy.

Having started down the road of philosophical learning with Soren Kirkegaard several years ago, I was well overdue to read some Sartre. I’m not sure this is the place I should have started. While it was conveniently available from my local library, it was somewhat lacking.

While I do appreciate the biographical aspects that appear to be part and parcel of every philosophy course and textbook, this is where Strathern starts to inject his views on Sartre. He continues to do this in his thoughts on Sartre’s work.* When Bertrand Russell does this it comes across as witty, snarky, and probably deserved. When Strathern does it he comes across as childish and distracting.

I think my biggest criticism was that this book felt lacking in substance and critical insights. I was probably after something a little more substantial as an overview, along the lines of a university lecture. For those wanting a short biographical overview with a few ideas sprinkled in, this would probably hit the mark.

* E.g. He mockingly describes Sartre’s existentialism and his insights. Strathern describes Sartre as a brilliant thinker, but also a pretentious windbag. One way he did this was by saying Sartre spent 1933 in Germany studying the ”phenomena” of existence. That was the year Adolf Hitler came to power, but Sartre was too busy pondering existence to take much notice of reality, a condition that stayed with him for the rest of his life. An easy criticism to make but also an ignorant one if you understand that Berlin was a mecca for thinkers, cultures, and artists until after Hitler came to power.