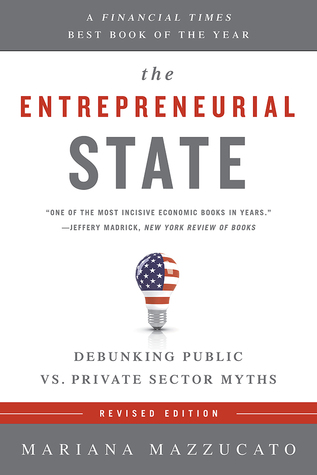 Government: We invented this.
Private company: Can we have it?
G: Sure. Just remember to pay you taxes.
P: Lol, our what?

The Entrepreneurial State is Mariana Mazzucato’s detailed effort to debunk some of the often claimed myths about government’s role in innovation. Her argument is that it is the public sector, not the private sector, that is often the innovators, risk-takers, and entrepreneurs in the economy. And because ideology has pushed for the state/government’s role to be smaller, we run the risk of not having the next generation of innovations/technologies.

I recently read Mariana’s The Value of Everything and wanted to read this earlier work. Similar to her arguments about how we measure the economy, Mariana’s arguments about innovation are well made, have plenty of references, piles of evidence, some great examples, and leave you with the head-scratching amazement that we need this book.

I’m sure that anyone who has worked in the public or private sector would read some of the examples in this book and be immediately reminded of some from their own field. Whether it be the government contract their company was gifted, or the publicly funded research that is commercialised, or the public infrastructure support given for that new project, we can probably all think of examples where entire industries or technologies wouldn’t have happened without governments taking the first step.

So how is it that myths (listed below) about the economy and who the entrepreneurs are persist?

Myths about Drivers of Innovation and Ineffective Innovation Policy
Myth 1: Innovation is about (private) R&D
Myth 2: Small (government) is beautiful
Myth 3: Venture capital is risk-loving
Myth 4: We live in a knowledge economy—just look at all the patents!
Myth 5: Europe’s problem is all about commercialization
Myth 6: Business investment requires ‘less tax and red tape’

There is only so much ideology that can stand in the way of reality. Unfortunately, I suspect that there is plenty of ideology floating around like an iceberg during a maiden voyage.*

An excellent book that is well worth reading.

We live in an era in which the State is being cut back. Public services are being outsourced, State budgets are being slashed and fear rather than courage is determining many national strategies. Much of this change is being done in the name of rendering markets more competitive, more dynamic. This book is an open call to change the way we talk about the State, its role in the economy and the images and ideas we use to describe that role. Only then can we begin to build the kind of society we want to live in, and want our children to live in, in a manner that pushes aside false myths about the State and recognizes how it can, when mission-driven and organized in a dynamic way, solve problems as complex as putting a man on the moon and solving climate change. And we need the courage to insist—through both vision and specific policy instruments—that the growth that ensues from the underlying investments be not only ‘smart’, but also ‘inclusive’.

* You only have to read some of the 1-star reviews for this book to find evidence of this ideology in action.