Book review: The Utopia of Rules by David Graeber 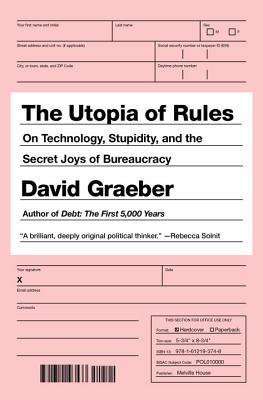 The Utopia of Rules: On Technology, Stupidity, and the Secret Joys of Bureaucracy by David Graeber
My rating: 5 of 5 stars

The Utopia of Rules is a collection of David Graeber’s essays around bureaucracy. He dives into where bureaucracy came from, how it was changed by the rise of large private companies, how this is impacting society, and how we secretly love all this stupid stuff just a bit too much. Graeber combines history, illustrative anecdotes, anthropology, and insights that you realise have been staring you in the face for years. He also argues that we’ve largely accepted bureaucracies as they now stand, but because of the implications for power relations, we should try to change or remove them.

With the recent passing of David Graeber, I thought I should read some more of his work. I’ve previously read the excellent Bullshit Jobs and wanted to dive into some of his other work. That lead me to his essay Of Flying Cars and the Declining Rate of Profit which in turn lead me to The Utopia of Rules. That essay is incorporated and expanded in this book to bring it into the main thesis. Other sections similarly come from essays published elsewhere, so if you’ve already read many of Graeber’s essays and articles, you’ll recognise a lot of the material here.

I think one of the most interesting insights from Utopia of Rules was how bureaucracy has morphed from the civil service that ran society (and was a great place to park stray aristocrats and military officers) into the bureaucracy of big business. Some will bristle at this insight until they realise that “cost recovery”, “KPIs”, and “performance reviews” are in all big organisations, regardless of them being public or private. This builds on Graeber’s insights from Bullshit Jobs, that showed the private sector was often more guilty of waste, mismanagement, paperwork, etc. to the point of creating entire useless jobs to do them.

How this bureaucratic system is then used to exploit the public, uses implicit and explicit violence, and obfuscates accountability is also interesting. Graeber’s example of trying to apply for health insurance for his mother is how companies profit. They effectively keep money for the company/government that is due to the public they are meant to be servicing.

This is also where I disagree slightly with Graeber. In a complex society, there is a need for some level of organisation (bureaucracy). Is it a good idea to have a senior research scientist spend a large part of their time filling out paperwork, applying for funding, and reporting to the funders rather than doing research? Well, no. But is it a good idea for that researcher to just get money and do whatever they feel like without any reporting? Well, no. As much as no researcher is just going to blow their grant money on a sports car and Columbian Marching Powder, the paperwork is meant to create a solid research plan, figure out what underlings they’ll need, and get the creative work solidified (hypotheses, designs, etc). That the paperwork doesn’t really achieve this is something that needs to be criticised, especially as the reason it fails and is needlessly time-consuming and complex is because of that private company influence Graeber outlined.

And Graeber argues that bureaucracies are no longer analyzed or satirized. This is a large part of the problem. We experience them every day, but those with power effectively stifle any input we have to reforming them. Satire and social critique are a useful tool in this regard, which I assume is why Graeber’s review of The Dark Knight Rises was included. He uses it as an example of institutional power using popular media to control the narrative and condemn social critique and movements.

Overall, I enjoyed The Utopia of Rules and look forward to reading more from Graeber, particularly Debt.

“I asked him why everyone was still waiting for even one bank official to be brought to trial for any act of fraud leading up to the crash of 2008.
OFFICIAL: Well, you have to understand the approach taken by U.S. prosecutors to financial fraud is always to negotiate a settlement. They don’t want to have to go to trial. The upshot is always that the financial institution has to pay a fine, sometimes in the hundreds of millions, but they don’t actually admit to any criminal liability. Their lawyers simply say they are not going to contest the charge, but if they pay, they haven’t technically been found guilty of anything.
ME: So you’re saying if the government discovers that Goldman Sachs, for instance, or Bank of America, has committed fraud, they effectively just charge them a penalty fee.
OFFICIAL: That’s right.
ME: So in that case … okay, I guess the real question is this: has there ever been a case where the amount the firm had to pay was more than the amount of money they made from the fraud itself?
OFFICIAL: Oh no, not to my knowledge. Usually it’s substantially less.
ME: So what are we talking here, 50 percent?
OFFICIAL: I’d say more like 20 to 30 percent on average. But it varies considerably case by case.
ME: Which means … correct me if I’m wrong, but doesn’t that effectively mean the government is saying, “you can commit all the fraud you like, but if we catch you, you’re going to have to give us our cut”?
OFFICIAL: Well, obviously I can’t put it that way myself as long as I have this job …”