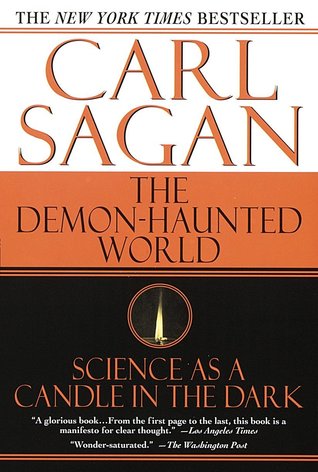 The Demon-Haunted World: Science as a Candle in the Dark by Carl Sagan
My rating: 5 of 5 stars

Hey kids, want some of the good stuff? Take a hit of this Science & Critical Thinking. It’ll blow your mind!!

Carl Sagan takes us on a journey through the history of science and our fleshy meat-sack attempts to understand the universe. He tries to illustrate the difference between knowledge and nonsense. And he tries to instill a sense of interest and wonder in the universe around us, something that he believes is a cornerstone of a functional society into the future.

I first read Demon-Haunted World in undergrad *cough-cough* years ago. I read it again about a decade ago, although have little memory of doing so. So it was interesting to revisit Sagan’s case for following knowledge (through science) in the post-alternative facts world.

Possibly the most obvious aspects of this book are the often-quoted sections about the risks of not valuing education and knowledge. What was more interesting this time around was digging into the offhand remarks and bias of the book. The introduction had a great remark about a teacher being a bully to female students that was barely explored, despite being a great anecdote about how certain groups are held out of STEM fields. Another was the US-centric bias (obviously the book was written by an American for an American audience) which was at odds with the theme of science and education helping everyone.

There were also more disappointments this time around. Sure, I still love the Baloney Detection Kit. And being reminded of how so many curious people don’t get exposed to good information because we don’t value actual knowledge. But I’ve got less time for the scientism that leads to dismissals of philosophy or other knowledge methods. While Sagan’s was a mild scientism, it does feed into something many pro-science communicators can fall into the trap of and comes off as a little arrogant.

I guess I’ll revisit this in another decade. Looking forward to it.

Comments while reading:
Sagan talks about his humble origins and passion for science. It’s good to see someone acknowledge how the “inspiring teacher” trope is often not present, both for those who develop a passion and for those who don’t for whatever subject.

There was also an incidental point made about bullying and sexism that was almost glossed over. He mentioned one of his teachers being very good but also a bully. Someone who delighted in being mean to the female students. This sort of overt sexism (or racism, or bigotry in general) undoubtedly has held back generations of people from STEM. The more subtle versions persist and do similar levels of damage.

The oblique references to post-modernism are a bit disappointing. I understand that Sagan has the common misunderstanding of the philosophy, but I’d like to think someone like him would have taken the time to read and understand it. Although, it would help if the po-mo writers weren’t so verbose and abstract (and being translated from French).

Sagan covers a bit about a Randi hoax done on the Australian media. It was interesting to hear about how credulous our Aussie media were back then. Sorry, what am I saying? They are still credulous fools publishing anything for outrage and eyeballs. The comedy team, The Chaser, just recently pranked the media with a fake Fairy Bread petition with exactly the foaming outrage from conservative media you’d expect.

It’s interesting to come out the other side of organised skepticism and re-read Sagan. He and some of the other more reasonable voices (e.g. Phil Plait) still come across well. But you can also see the scientism. Sagan’s isn’t as pronounced as some others, but you can’t help thinking that Sagan might have slid down the same road into grumpy old man shouting at people on Twitter road that so many of his contemporaries have (cough Dawkins cough). I’d like to think not.

5 thoughts on “Book review: The Demon-Haunted World by Carl Sagan”