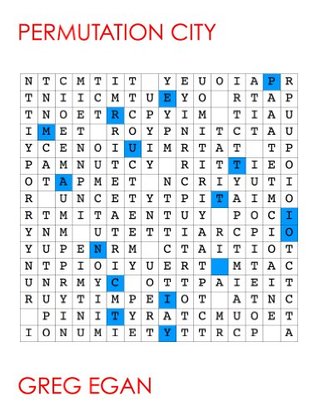 Permutation City by Greg Egan
My rating: 2 of 5 stars

Permutation City is about a guy – I’m sure he had a name, but as most reviews and the back cover indicate, it doesn’t matter – who believes he can create an immortal universe in cyberspace. His doubters think he is a conman, his backers want a copy of themselves there, and his colleagues think he’s still crazy. Can he create an everlasting future in Permutation City?

This was my second attempt at reading Permutation City. A few years ago, this novel and Egan’s work in general, were recommended to me by a friend. I gave up after a couple of chapters. This time I made it all the way through. I’m not entirely sure it was worth it.

Egan is excellent at imaginative and interesting ideas. There is a lot going on in this book that will tickle fans of hard sci-fi in all the right spots. But that was pretty much the only interesting aspect of the book. Everything else was bland or unimportant.

For example, I can’t remember the protagonist’s name nor any character traits. And since I’ve returned the novel to the library, I can’t look it up there. I’d check some of the reviews to remind myself, but none of them mention the protagonist either. There’s a Wikipedia page, which eventually mentions the protagonist (Paul Durham) roughly two thirds through the page.

I can’t recommend this book. Plenty of hard sci-fi fans disagree with me. YMMV.