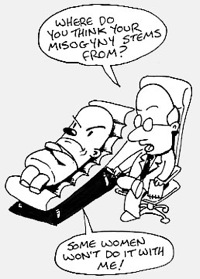 Currently I’m doing a writing course, a real one, one that assigns homework! For my homework I was doing some research when I accidentally came across a webpage and general philosophy that I found interesting. By interesting I mean ‘rabidly sexist garbage that demeans both men and women.’

Now I have heard this stuff before, a lot of it stems from a lack of modern male identity in the post-feminism world. Whenever you have social change there will inevitably be a push-back and level of disenfranchisement of sectors who have no clear ‘voice’. They talk about being “alpha males” and swallowing the red pill, taking control of their lives and their women. This is, of course, just the excuse that bigots and morons need to write garbage like:

This sort of shit really is pathetic. Take the first article as an example: in what world is child support worse than the second most heinous physical act? (NB: the worst is still murder, although combine the two and you have a new crime novel) Now if we were actually talking about misandry then there would be valid concerns and points to be made and opinions to be listened to. If we were talking about the role of men in society and how it has changed, again, legitimate concerns and points to be made. But how does the lot of men (and women) improve with this:

It should be noted that 30 something American women are not becoming traditionally minded or anything, but rather they are simply in a desperate rush to find the useful idiot who will put a roof over her head. Once an American man goes foreign, American females both in their age 20′s and 30′s are sloppy seconds and cannot compete with non-Western women…… It takes time but your chances of finding a quality girlfriend elsewhere are better, as opposed to in the States where men have to contend with the overweight, screwed up, tattooed, walking STD incubators that are pass for women today. TS: I kid you not, this is an actual quote from one of the articles.

I leave you with Steve Shives’ wonderful take on this topic.

One thought on “Manly? Hardly.”