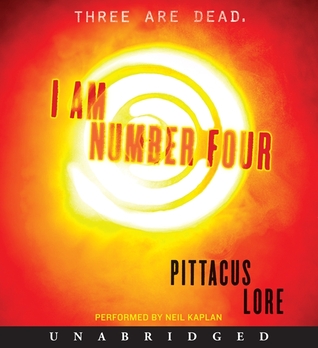 I Am Number Four by Pittacus Lore
My rating: 2 of 5 stars

This is a really hard book to review. For starters, I saw the movie first, which starred Timothy “Raylan” Olyphant. I mean, sure, he didn’t have the hat, and he barely shot anyone, and it was only a supporting role, but just his mere presence made the film watchable. Then there is the infamous history of the authors of the book. That is an interesting tale about an author, who prefers to fictionalise his non-fiction works, recruiting some starry eyed grad students to write a bunch of novels for him. Upon receiving the novels he paid the students in lumps of coal. Then there is the fact that this book reads like it was written by someone who was paid in valueless commodities.

This begs the question: why did I even bother reading it? I did mention Raylan Givens was in the movie, right?

I think it is fair to say that author James Frey is not highly regarded for his ethics in the publishing or business world. This is a key reason to downgrade any rating this book receives. That may seem harsh – judge the writing, not the author – but it is hard to enjoy something you know was produced via exploitation (hi to everyone reading this review on an iPad or iPhone). But I still felt I had to give the book a chance.

The book itself is very similar to the movie. If you have seen the movie you know this isn’t high praise. That said, the movie was watchable fun, if immediately forgettable. And that pretty much sums up the book as well, (barely) readable fun. The main difference between the book and the movie is that the characters were actually portrayed far better in the movie, especially John and Sarah. In the movie Sarah had a depth of character that wasn’t really present in the book (which could just have been the writing perspective), while John in the book comes off as a whiny teenager as opposed to the more broody movie portrayal.

This should all add up to a book I wouldn’t normally bother finishing. But the story itself, the ideas presented, some of the scenes; were well done. This was just enough to overcome the sections of hackneyed writing (we get it, high school is tough, blah blah), and to make you ignore the ethics of the book’s production. But even Raylan couldn’t encourage me to read more of the Lorien Legacies series of books.

7 thoughts on “Book review: I Am Number Four by Pittacus Lore”