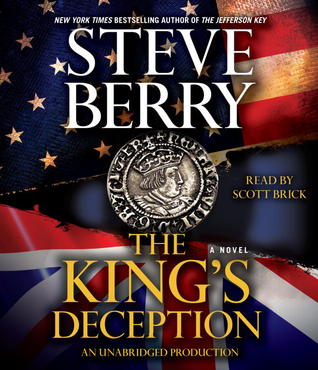 The King’s Deception by Steve Berry
My rating: 3.5 of 5 stars

Have you ever wanted a thriller to star not one, but two book store owners? Well, this is the novel for you!

That’s right, our favourite book seller is back in action. This time Cotton Malone is caught up in a CIA operation called King’s Deception. See what Steve Berry did there? Cotton and his son Gary get caught up with the CIA, SIS – better known as MI6 – and The Dedalus Society’s deadly spy games. King’s Deception is their game and Cotton has to blah blah the McGuffin surrounding Elizabeth the First before the blah blah.

I’m a big fan of Steve Berry’s novels. They are always entertaining and well thought out thrillers. Berry is the writer Dan Brown wishes he was, but then takes a swim in his pool of money to console himself. As is typical with this genre, Berry seamlessly mixes the modern day with the historical McGuffin in a plausible and interesting manner. But for me, I found this to be one of Berry’s weaker novels.

My main fault with the book was that it was a story being recounted between the narrator and reader analogues, with the first and last chapters book ending the actual story. I hate this sort of story telling. It always feels hackneyed, even in films. At least flashbacks only last a short time, this is like having 95% of the story be a flashback. In this case you could cut the first and last chapters out and it would be a perfectly reasonable novel, so the additions of these parts feels superfluous.

Despite that criticism, the book was entertaining and would rank 4 stars, but I’m giving it 3.5 stars. I’m taking half a star off for the book-ends on the actual story.