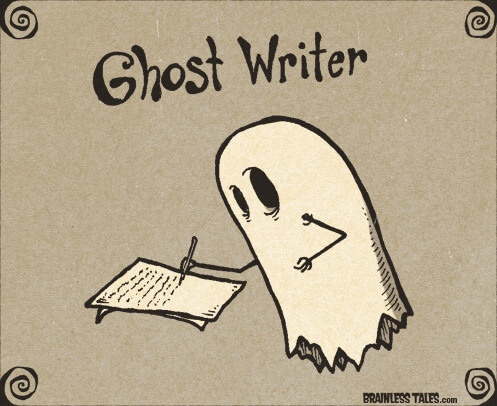 Is ghostwriting cheating? Well, this edition of It’s Lit discusses just that.

I think the most interesting point raised in the video is around the idea of the solitary author. This is the creative genius whose work you love or the dolt whose work you loathe. All praise and ridicule can be easily directed at one person. But outside of some indie authors, a book (or series of books) isn’t the work of one person. A lot goes into bringing a story to life and placing it in front of us readers for our entertainment. From the cover art to the editing, from the writer’s group feedback to the publisher’s request for a sequel, lots of people are involved in influencing, shaping, and ultimately creating a book.

Now, I have been known to take a dig at authors like James Patterson for their co-authoring ways. And I find it a little unseemly that Tom Clancy is still releasing new books despite having been dead for five years – seriously, half as many as his releases while alive. But that is probably as much about the mass-produced book under a name-brand that we used to associate as the domain of pulp titles. To have that become part of the big-name author stable cheapens the experience somewhat.

That cheapened feeling is probably related back to the idea of the solitary author. Or possibly that I’m not a huge fan of Patterson or Clancy. You know, one of those.

You might being asking yourself– Why do ghostwriters even exist? Isn’t that cheating? Isn’t literature supposed to be the result of one person’s agonizing need to create? Aren’t books supposed to be the blood, sweat, and tears of the tortured auteur? Well, the answer is more complicated than you think!

6 thoughts on “Fear of Ghost…Writing”