Book Review: The Society of the Spectacle by Guy Debord 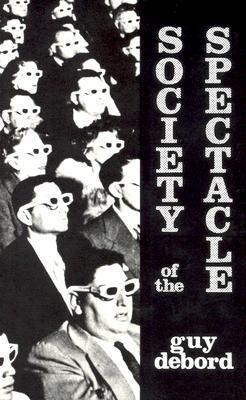 The Society of the Spectacle by Guy Debord

“Quotations are useful in periods of ignorance or obscurantist beliefs.”

The Society of the Spectacle is an aphoristic set of polemic essays that examines the “Spectacle,” Debord’s term for the everyday manifestation of capitalist-driven phenomena; advertising, television, film, and celebrity. He argues that we have become alienated from ourselves and reality in order to have us serve the economy/capitalism with the production of commodities and accumulation of wealth.

I first encountered the idea of the Spectacle from Peter Coffin (see below) and his video essays related to what he terms Cultivated Identity. This is a fascinating idea and particularly relevant today in the age of mass media, late-stage capitalism, and the commodified zeitgeist. Look at how much of our society is obsessed with or based upon edifying upward mobility, celebrity, fame, reputation, and positions of power or prestige.

This ultimately means that our media has become the thing that tells us how to think and it is essentially inescapable within our modern society. Thus, the limits of our conversations and thinking have already been defined, which then becomes a feedback loop for the media we consume. Click “Like” if you already agree.

The only drawback of this work was that it is obscurus and jingoistic. Aphorisms might be cool for ancient philosophers, but they don’t make for great enlightenment nor clear communication of ideas. I’ve actually gained more from reading and watching related overviews of The Society of the Spectacle than from Debord’s actual work.

Discussion of the Spectacle by a philosopher:

Another explainer on the Spectacle:

An audiobook in Spectacle form:

2 thoughts on “Book Review: The Society of the Spectacle by Guy Debord”