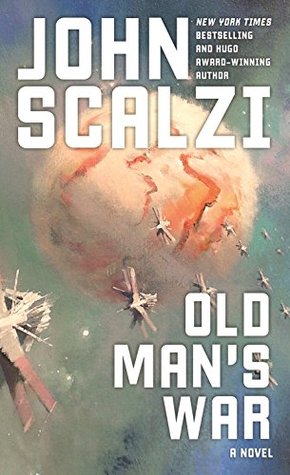 That feeling when you call someone a young whippersnapper and realise it’s your reflection in the mirror.

Widower John Perry has reached his seventy-fifth birthday and enlisted. The Colonial Defense Force are waging war across the universe and need old feeble bodies to join their fighting forces. After some upgrades and basic training, Perry and his new comrades are sent off to meet strange new people and cultures and kill the sons of bitches as quickly as possible.

When I finished reading I knew exactly what I was going to say about Old Man’s War. My entire review could be summarised as: It was fine. Just fine.

I decided to read Old Man’s War after my mixed feelings from reading Redshirts. To assuage those mixed feelings, I picked up Scalzi’s highest-rated book. And in many respects, it delivered. The “fresh” take on classic sci-fi novels from the likes of Heinlein was entertaining. But unlike those classics, I found myself nitpicking at various ideas and premises rather than being filled with wonder.

One of the premises I found hard to swallow was that in the infinite reaches of space, habitable planets are hotly contested property. Sorry, I just can’t wrap my head around that one. Even Scalzi’s handwaving explanation in the book feels like someone fully cognizant of just how much hand flapping he’s doing.* Given that this is the central conceit for the novel, it felt like there either needed to be better groundwork or less attention drawn to how close that premise circles the plot hole.

In my review of Redshirts, I noted two things that apply to Old Man’s War as well. He said. He said. The first is that this novel is nowhere near as funny as it thinks it is. It’s only upon reflection that I realised that many of the scenes were meant to be funny. Not the ideal time to notice the jokes. The second was the dialogue tags that often felt redundant and only there to remind you that the dialogue that could have been said by anyone had been said by a specific anyone.

This was an okay novel. Old Man’s War was entertaining enough to read but after two novels I’m not sure Scalzi entertains me enough for a third.