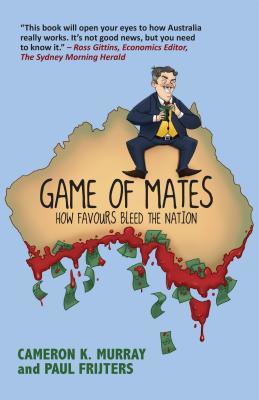 Game of Mates: How Favours Bleed the Nation by Cameron Murray

I don’t want to see the final season of Game of Mates, I’ve heard the entire thing falls flat.

Cameron Murray and Professor Paul Frijters set out to expose the inner workings of the Australian economy in Game of Mates. Through a series of case studies, they outline how a few (the Jameses) take from the many (the Bruces) by blurring the line between business and the regulators. Then, knowing that their readers will be suitably gobsmacked and annoyed, call for the masses (Bruces) to make a change.

As with any book about real-life grifting in the halls of power, this book made me annoyed and disillusioned. There is nothing more galling than to have someone show you how the grift is endemic and then realise you kinda knew. We kinda all know. There is no surprise here. And that means there is no “justice”. Cue scene of me staring out the window as rain drips down it.

Murray and Frijters conclude with some ways to stop the grift:

1) Reclaim the value of grey gifts for the public.
Essentially, when the grifters rig the system they gift themselves advantage/money/power. We have to tear that down. One example was Public-Private Partnerships on infrastructure developments, which essentially end up being a gift of public assets to private businesses with a guaranteed profit underwritten by the public.

2) Disrupt (James’) the grifters’ coordination.
This is fairly obvious, stop the revolving door between public and private interests, put in oversight, make sure the oversight isn’t part of the problem, etc.

3) Bust the myths (James) the grifters use.
This isn’t just about addressing the claims cherry-picked “experts” will make, such as promoting projects that aren’t needed (examples are given, there are plenty). This is also about reclaiming the narrative from these grifters. In Australia, this is particularly difficult as many of the media outlets are either owned or have close links to the same people grifting.

4) Fight back.
Disillusion can lead to apathy. That’s what keeps us on the losing end.

Speaking of the losing end, the costs of this game are:

Okay, so clearly this book hit the mark and is enlightening. Why only three stars, I hear someone say? Well, while I appreciate your question, I’m wondering what you’re doing in my house.

I think the problem I had with this book was the polemic style to it. We are told. I listed the figures above, and whilst those numbers are backed up, they are big claims that require fairly solid evidence. I felt the evidence was a bit flimsy. Not wrong, but maybe selective, or misrepresentative.

Another example was around how to stop the revolving door which amounted to banning people from getting a different job in the same industry. That’s probably not as well thought out as it needs to be.

Game of Mates is worth reading but it felt underdone.