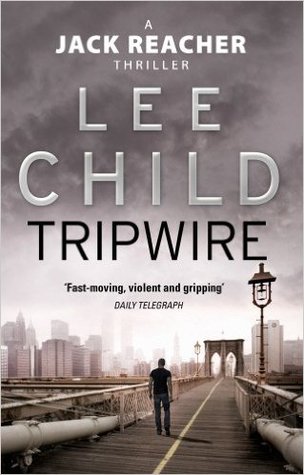 I’m going to refrain from making any applause or hot jokes. We need that like a nail in the head.

Reacher is digging swimming pools in Florida when a private detective comes looking for him. Later that day two thugs come looking for him as well and he finds the detective dead. This motivates Reacher to go to New York to find out what is going on. Who is looking for him? And what has that got to do with MIA Vietnam soldiers?

This was the second time I’ve read Tripwire. The first time I thought it was enjoyable but not one of the best in the series. I think that judgement still holds but is slightly less enjoyable for a second read. I think part of the problem was that this is a much earlier novel in the series so it felt somewhat less polished in its execution compared to the tight prose Lee is known for. But Tripwire is also early enough in the series that some of the superhuman aspects of Reacher have not yet surfaced.*

Something else I noticed was the ending. It would not surprise me if Tripwire marks the end of Lee’s first publishing contract. There is a feeling that he was writing a potentially final instalment. It’s a bit funny when you know how many more Reacher adventures there are and how at odds Tripwire’s ending is with that.

I wonder how I will feel about Bad Luck And Trouble or 61 Hours now?**

Tripwire was enjoyable but certainly not peak Reacher.

* Which is ironic given the ending. Although, that ending is very plausible. There was a well-known bodybuilder who experienced a similar incident with the same results for the same reasons.

** I’ve re-read a few books of late (E.g. Ice Station). Some haven’t been as entertaining, but others have been just as good, if not better upon a second (or third, in several cases fourth and fifth) read(s). I am noticing a pattern to which ones are better and which aren’t. This may be something I will have to assess in greater detail at some stage.