Book review: The Value of Everything by Mariana Mazzucato 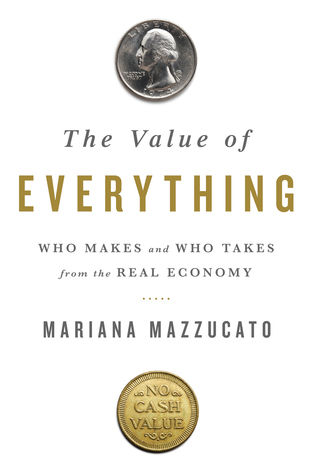 The Value of Everything: Making and Taking in the Global Economy by Mariana Mazzucato

What if I told you that we don’t measure most of the things we value in our economy?

Mariana Mazzucato sets out to show that when we talk about the economy we are only talking about certain parts of it (and of our society). She shows how the parts that are included is determined primarily by the history of economic thinking, ideology, and what’s currently making people rich. Mariana then argues that this is flawed and fails to account for several very important aspects of the economy to our current and future detriment.

I’ve read several economics books over the past year that have addressed the failures of the neo-liberal economic ideology. The solid argumentation, countless references, piles of evidence, and rather obviousness of the problems leave me scratching my head as to why these books need to exist. Why isn’t this obvious to the various “experts” who are running our economy?

The Value of Everything is a very solid argument for rethinking the way we diminish the role of government in our economy. The current “get out of the way while we’re making money, but bail us out when we mess up”* approach is clearly wrong. I’ve heard the very charismatic arguments from the likes of Friedman on why free markets are the way to go, and I thought Mariana’s rebuttals to those arguments were good if a bit too charitable.** But it is clear that governments have a long history of being the innovators, investing early, creating the value that business then exploits, and without that, we’re going to see things fall in a heap.

Well worth a read so we can all start to take off our neo-liberal ideological goggles.

* Privatise profits, socialise losses.
** Worth reading this piece on the Virginian School, a more extreme version of Friedman’s Chicago School for some context as to how the “Free Market” is a con to turn the masses into slaves.

See also:
Curing Affluenza – this has a similar upbeat “fixing” approach to our current system.
Utopia for Realists – takes a different approach and suggests a different system may be needed.
Austerity: History of a dangerous idea – similarly documents some of the failures of neo-liberalism and how it is ideologically driven.