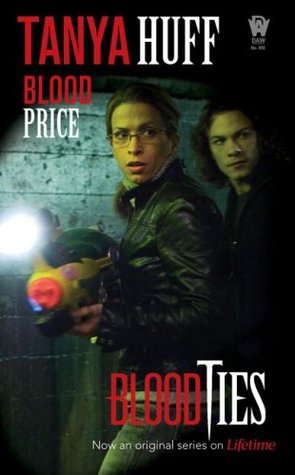 Blood Price by Tanya Huff
My rating: 4 of 5 stars

All librarians need the training to minimise loaning occult books to unhinged people.

Vicki Nelson was a respected Toronto detective until her eyesight deteriorated. Now operating as a private detective, she accidentally stumbles upon a vicious murder. Her interest in the case is piqued when more killings occur and she is hired to investigate one of the murders by a grieving client. But the murders have also caught the attention of Henry Fitzroy. The victims being drained of blood brings talk of vampires, and the last thing a vampire like Henry needs is a mob hunting him. Vicki and Henry’s paths cross and they decide to team up to try and stop the murderer.

Half-a-year ago I read Tanya Huff’s Summon the Keeper. I enjoyed that amusing and fun urban paranormal novel so I decided to try Huff’s Blood series. The styles of the two series are very different. The Keeper series is humorous and firmly set in the paranormal world. The Blood series has a much more serious tone and has an emphasis on the paranormal bleeding into the real world.

Blood Price has a lot in common with other detective paranormal stories, like the Dresden Files. So if you enjoy that sort of novel, then you’ll like this too.

Related to this point about similarities to other paranormal series, something I noted with both of Huff’s works was that there were many elements I’d seen elsewhere. But these novels were written and published a decade or more before others were using them. Does that mean Huff is due some royalties or just some hat-tips?

I sense more Tanya Huff books in my reading future.