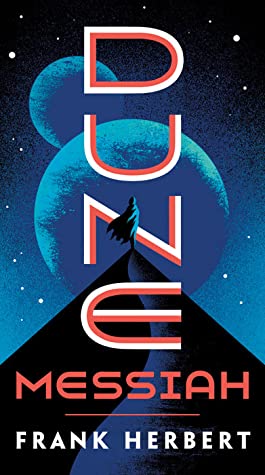 Dune Messiah by Frank Herbert
My rating: 4 of 5 stars

Beware of a Tleilaxu bearing gifts.

After successfully taking the imperial throne, Paul “Muad’Dib” Atreides now rules as Emperor. The Fremen have been busy waging a religious war across the empire in Paul’s name, racking up a body count that would make all other past atrocities look like a rounding error. Paul is trapped in his destiny and is trying to nudge (future) history toward peace while negating conspiracies, fulfilling his role as Emperor, and keeping Chani safe.

Dune Messiah is an interesting follow-up to Dune. I had been expecting something of a look into the universe outside of Arrakis. Instead, the story is focused on (to use Herbert’s own term) inverting the tale of the chosen one’s rise to emperor. So much of the novel is about Paul feeling trapped, his failures as a leader, and the usual problems associated with retaining power as a dictator.

In many ways, this is a smaller novel than Dune. Much of the universe has been established, particularly on the political side of things, which means Herbert is able to discuss the foibles of his hero. This is both a good and bad thing. Most sequels would go bigger (or at least more explodey), so turning inward on the tale makes Dune Messiah interesting. But it also means you feel like this instalment is somewhat lesser.

I’m quite intrigued to see where Herbert took this series next [insert joke about Brian Herbert ruining the franchise after that].