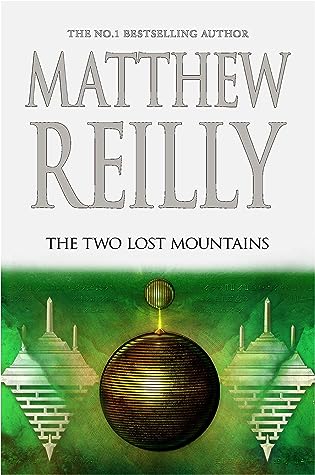 The Two Lost Mountains by Matthew Reilly
My rating: 4 of 5 stars

Jack West Jr is back in the third and final… almost final instalment in the trilogy which started with The Four Legendary Kingdoms. When we last saw him he’d lost family, friends, and was battling to keep ahead of the royal families while saving the universe. And nothing has changed. Sphinx has powerful new weapons that can put a city to sleep and has all the clues to help him gain access to the final challenge. Meanwhile, Jack is trying to save his family and friends and figure out what everyone else already knows.

As I’ve already indicated, I was expecting this to be the third book in the adventure trilogy. If I had remembered any of Matthew’s social media posts about the book I’d have realised he’d had so much fun writing that the trilogy has gone all Hitchikers Guide. This was both a good thing, as who doesn’t enjoy more of the books they are reading, and a bad thing, because the next book isn’t out yet!!!

Much like the previous The Three Secret Cities, I really enjoyed the book but upon reflection, wasn’t as excited by it as some of Matthew’s novels. I’m starting to suspect that this is a “more of the same” issue. The thrill of a Matthew Reilly novel is somewhat dampened by the fact I’ve read all of his stuff (multiple times in some instances) and am now a jaded husk of a reader, doomed to seek thrills from other authors who will fail to live up to my ever loftier standards. Other authors have reached this point much earlier for me (looking at you James Rollins and Steve Berry). Hopefully, Reilly will pull out all the stops – that is to say, no stops, just all sprinting – in the final in this Jack West Jr series.

Looking forward to the next one.