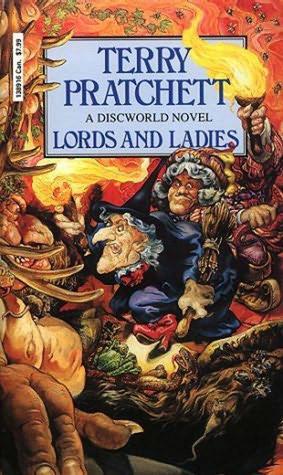 Lords and Ladies by Terry Pratchett
My rating: 4 of 5 stars

So… Elves like to watch you dance naked… And don’t even tip. Creepy.

The kingdom of Lancre is about to host the royal wedding of former fool, King Verance II, to current witch, Magrat Garlik. The locals are preparing for the wedding and the arrival of foreign dignitaries. With the wedding scheduled for Midsummer, when the skin between realities becomes thinnest, elves are trying to return to the Disc. But not if Granny Weatherwax has anything to say about it.

I have to preface this review by saying it has been so long since I’ve read A Midsummer Night’s Dream that there is virtually nothing I remember of it. Maybe a thou or two, but that’s it. As such, a novel that mocks it is not going to be fully appreciated by me.

As I was reading Lords and Ladies I was thoroughly entertained. There were some fantastic moments, not least of which was the inclusion of the Many Worlds Theory. It’s easy to pick out quotes:

“In fact, the mere act of opening the box will determine the state of the cat, although in this case there were three determinate states the cat could be in: these being Alive, Dead, and Bloody Furious.”

“If cats looked like frogs we’d realize what nasty, cruel little bastards they are. Style. That’s what people remember.”

But several days on from finishing the novel and I’m hard-pressed to think of anything much to say or highlight about Lords and Ladies. It’s an entertaining read, a solid entry in the Discworld series (particularly the bees), but otherwise somewhat unremarkable. That feels somewhat sacrilegious to say about a novel that is head and shoulders above most anything else. I guess there is a universe in which I have read A Midsummer Night’s Dream more recently and regarded this Discworld instalment more highly, just not in this one.

2 thoughts on “Book review: Lords and Ladies by Terry Pratchett”