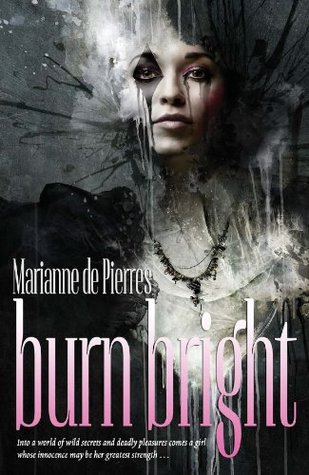 Burn Bright by Marianne de Pierres
My rating: 3 of 5 stars

There’s a pill for that: a guide to partying on Ixion island.

Retra’s only friend, her brother, abandoned her to seek pleasure away from the stifling culture of Grave. She decides to follow him to Ixion, enduring the pain of an obedience implant to do so. Once there, everyone is encouraged to party until they burn out and get too old. Retra is more concerned about finding her brother. But in doing so, she uncovers the secrets about Ixion and upsets those in charge.

Burn Bright was fine. It had a fast pace and an interesting world.

I think I was halfway through the book when I made the comment, “I don’t know where de Pierres is heading with this, if anywhere.” I guessed straight away that the various Ixion inhabitants were using the kids as cattle in some way. My assumption was that they were vampires, to be honest. It took until the second last chapter for the big reveal, which wasn’t different enough from my assumption to be much of a “twist”.

This could just be the jaded reader in me wanting something fresher. I wasn’t sure where de Pierres was headed with Burn Bright because it felt like the obvious reveal couldn’t be what we were building to. But it was. Essentially, the big mystery was not interesting enough to make everything else payoff.

Burn Bright is entertaining enough, but I feel like this is a book for younger less jaded readers than me.