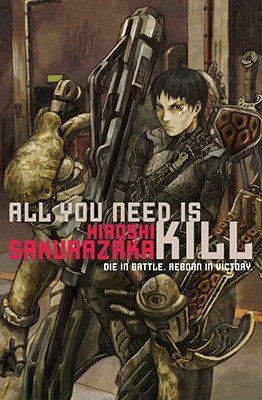 All You Need Is Kill by Hiroshi Sakurazaka
My rating: 4.5 of 5 stars

I’m not sure that there are enough sci-fi thrillers out there. Maybe we should get James Patterson to churn out a few dozen this year, or maybe someone can point me in the direction of a few dozen authors like Hiroshi Sakurazaka.

People may be aware of All You Need Is Kill because of the film adaptation starring Tom Cruise and Emily Blunt, retitled Edge of Tomorrow because ‘kill’ had such negative connotations. I haven’t watched the film yet, but have heard very good things, which makes sense, since this is a very good book. The premise for the book (and film) is that Earth has been invaded by terraforming robots – Mimics – who are preparing the planet for an alien race to come live here. These robots have a special trick they use to help them win battles: they can send a signal back in time to allow time loops to play out until they win. Keiji Kiriya is a new recruit, but in his first battle he gets caught in the loop, and he is able to alter the future by learning from his mistakes.

Obviously this sounds a lot like the Bill Murray film Groundhog Day, just with less Bill Murray and more giant robots trying to destroy the planet. The story never lets up, despite the fact that the two days (the day before and day of the battle) are on an endless loop until either Keiji or the Mimics succeed. And the twist ending caught me somewhat by surprise. I recommend this book to any fans of thrillers, unless you can’t stand the idea of people in robotic suits fighting alien robots for the future of the planet – which is, of course, impossible not to love.