The short answer is no.

The even longer answer is explained in this video from Hannah Fry and Numberphile:

Comparing the book to the movie has been a long-standing blog topic of mine, which made this maths video pretty cool*. I’ve since developed a category list that relates to what Hannah discussed in the video about what gets made into movies.

The Metacritic vs Goodreads analysis mentioned in the video is interesting and worth a read. 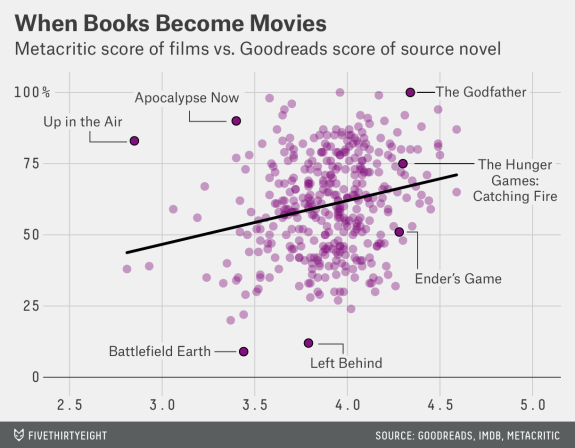 *As always, I’m working from a definition of cool that includes the nerdy stuff I like.**

**Did you know that cool has always been cool?***

*** Well, unless you use Ngram Viewer to check Google Books for word usage over time like some sort of nerd…

Let’s face it, there are certain things that all houses should have: bedroom, kitchen, lounge, secret room concealed behind a bookcase. Now obviously not everyone has enough space for a hidden room in their house, others are lucky that their house has a roof. Clearly the secret room hidden behind a bookcase is the domain of the rich. But it has recently come to my attention that some rich people have failed in their duties as rich people.

If you are wealthy and you don’t have a bookcase that conceals a hidden passage or room, then you are going about being wealthy the wrong way. In the interests of society, please donate your wealth to someone who will spend it more wisely.

How to guide here.

I’ve mentioned before that I’m a fan of The Punisher. I hadn’t actually read many of the comics until last year and the reason I started was I wanted to make sure I wasn’t treading the same old vigilante ground as a genre defining anti-hero like The Punisher with my own work. Not only was I highly entertained by the Garth Ennis runs of The Punisher and the Punisher Max series, but I can now avoid treading on The Punisher’s territory; something no-one should do!

The problem with The Punisher has been the three terrible movies that have been made. The first starred Dolph Lundgren, enough said. The second starred Thomas Jane and just didn’t work; I blame Travolta and studio cheesiness. The third film starred Ray Stevenson and had all the right elements but managed to mess it up. Now we have a fan film starring Thomas Jane that bleeds awesome!

I for one would love to see a Punisher film that hits the mark. Either Jane or Stevenson would be suitable and clearly Jane is interested in reprising the role. So Hollywood: can you not mess it up this time?