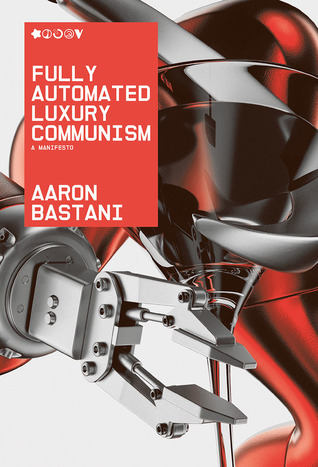 Fully Automated Luxury Communism: A Manifesto by Aaron Bastani
My rating: 3 of 5 stars

If you labour the point does that make you working-class?

Dr Aaron Bastani is best known as one of the founders of Novara Media in the UK. A recurrent theme to their journalism is a hope to move society toward Fully Automated Luxury (Gay Space) Communism. His book attempts to articulate the whys and hows this will be possible and reasoning for it being the utopia we’re all looking for.

Fully Automated Luxury (Gay Space) Communism has been the dream of lefties since they first spotted a capitalist getting out of bed at noon to start a hard day of reading the paper and smoking cigars at a Gentleman’s Club. The rise of FAL(GS)C has been predicted by people of all political stripes, but notably anyone with one eye on the future. It’s often part of post-scarcity utopias common in science fiction. So writing about it in the 2010’s is not exactly groundbreaking.

In many respects, Bastani’s text is an update on how close we are to utopia right now. While it stands alone as its own argument for FALC, there aren’t a lot of new insights.

This isn’t a bad thing. I think people do need to be reminded that the future we choose to have is being shaped now. That our future could be one that is good for everyone rather than good for the type of people who buy diamond collars for their dogs.

But I felt Bastani laboured the point throughout. This could be because I’m somewhat familiar with most of the points raised. It could be that I was wanting less explanation of the basics and more of the ramifications (see for example my comments below about automation jobs lost vs created). Regardless, I felt this left the book somewhat lacking in its arguments and evidence.

I also felt that there were points made that were somewhat irrelevant or missed huge points. Space mining seems like one of those things people talk about because it has the word space in it. I’m yet to be convinced of the need and point of it. And as great as disrupting the system can be, you have to talk about the transition otherwise you risk making things worse, not better.

If you’re familiar with FALC and read the occasional piece about technology, this book isn’t going to offer any new insights for you. For everyone else, I think this is worth a read to start thinking about the sort of world WE want rather than the world others will create for themselves.

Comments while reading:
I’ve heard Bastani talk about some of this before, but in his writing he is somewhat labouring the point about automation from computers. Yes, automation has happened and will happen from increased computing. But I hope he gets into less of Moore’s Law and more on the jobs lost to automation, if that is increasing, and whether they are being replaced.

Although, on that point, Bastani is trying to argue for FALC, so not really about replacing the jobs as sharing the fruits of their labour, methinks.

While I get the excitement about mining space, I really don’t see the point. As Bastani notes, one precious metal asteroid would oversupply the market thus make the exercise worthless. Not to mention, do we actually need more stuff, or are there just billionaires eyeing off the title of trillionaire? Like phosphorus, supposedly we’re running out… We’re not, actually, we’re just running out of cheap and easy to access sources. Hell, we literally flush away shitloads of nutrients and metals every day. If you change the way we think about our resources (particularly the value we assign) then it could be easier to just use our current planet better. And share better…

The discussion of the future of food and agriculture is interesting if a little inaccurate. We see the common claims about soils only having X harvests left (that is just false, but widely reported), and about meat requiring lots of inputs (bit misleading since something like a cow is used for a lot more than just the meat). In fairness, his mistakes are understandable as there is plenty of scientific literature that makes these same mistakes (which really undermines the credibility of some groups with those in ag science).

But the point about food being able to transition to partly/mostly/wholly being done “in the lab” is true and exciting. It does, however, have to be done as a proper transition, not as a disruption (as implied). Otherwise you’re lining up a genocide for food animals, the collapse of a massive industry, and huge negative environmental impacts (weeds and pests alone would be detrimental). Family farms are the biggest landholders and environmental managers, and I see a logical transition to having them become environmental land managers (reintroducing flora and fauna, documenting said same, controlling ferals, etc).

Bastani’s overall thesis is pretty obvious: hey, look at all of this now and near-future tech. We could literally all sit around and do whatever we want. Wouldn’t that be better than having a handful of trillionaires while the rest of us starve?