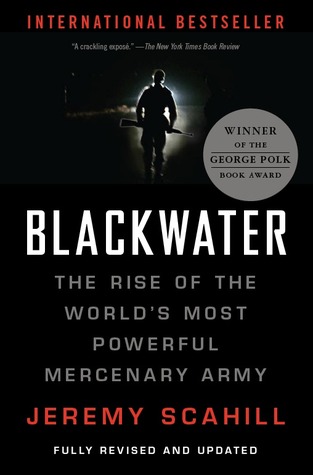 Blackwater: The Rise of the World’s Most Powerful Mercenary Army by Jeremy Scahill

Let’s privatise the military. How could that possibly go wrong?

Blackwater: The Rise of the World’s Most Powerful Mercenary Army outlines the political landscape of Blackwater’s founding, the personal history of several key players – particularly Erik Prince – and the actions and intentions that made the company so infamous. It attempts to explain and document how mercenaries went through a rebranding to become the operators of choice in conflict zones around the world.

Okay, so I thought I had read enough news articles and the like to have some idea of what Blackwater was about. Mercenaries and the name Blackwater became something of a shorthand for “loose cannons”, becoming the villains in movies and TV shows. But as Scahill outlines, the reality and totality are so much worse than I’d thought. Blackwater and several other companies are discussed, along with the players who made this all possible. You’ll recognise many of the politician’s names, but maybe less so the “contractors”. This was disturbing reading.

There were a few very important points that were made. The first was how senior political figures decided they wanted to privatise the military and associated intelligence work. This is such a terrible idea that you have to be pretty ideologically bent-out-of-shape to think it is good. The most troubling reason for this being terrible is the lack of accountability this gives these newly privatised people with guns, bombs, and shady contacts. As numerous leaks have shown over the years, the military is already far too unaccountable.*

Which brings me to the second point, that once they are privatised, the companies lobby hard to remain unaccountable, saying they don’t fall under military rules because they are private citizens, and that they don’t fall under civilian rules because they are acting as part of a military force. In essence, they can literally commit murder and they have been positioned by their lobbyists and key politicians to never be even investigated for the crime.

Those points should disturb everyone. You may not see a problem with war profiteering, or religious fundamentalists pushing for war and creating conflict (or at least involving themselves in them), or free marketeers wanting to privatise everything, or private companies hiring “shoot-first-never-answer/ask-questions” mercenaries to guard their kitchen supplies. But I think we can all agree that you have to be accountable for your actions, and Blackwater (et al.) has not been.

The only complaint I have about Scahill’s book is that it was somewhat repetitive. Several points were raised repeatedly, not to highlight them, but because the surrounding issues or players were being discussed again.

After reading this I can only hope that the various players involved aren’t allowed to have positions of power and influence ever again.** 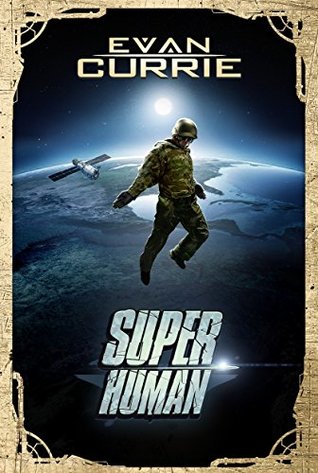 Little known fact: just about everyone has been in the military. Apparently.

Former Marine, Captain Alex Hale, is meeting up with his mates/buddies. They are all ex-military and now love to catch up to wear leathers and go biking. The two local bikie gangs have chosen the same night and location to go to war with one another. They roll on the same campgrounds, armed, and ready for mayhem. Just as the shooting starts something intervenes. When the survivors awake, they have been changed. They are now Superhuman.

A few chapters into this novel I pulled out my phone to check some details. Not my usual fact-checking (although, there was need of that too), but to see who had published this novel. The answer didn’t surprise me.

My biggest criticism of this book is that it felt like a first draft, not a completed novel. Throughout there were so many little things that hadn’t been tidied up that it brought a lot of other problems into view. Normally you wouldn’t notice those issues because this novel is quite fast-paced and entertaining. If only more effort had been put in this could have been a really good action story. Instead, it feels like a let-down.

And I have to mention the genetics mistakes. There is one scene with “scientists” rabbiting on about gene editing, DNA, and various other sciency sounding stuff. It would have been nice if those “scientists” had at least read the Wikipedia article on Non-Coding DNA before talking about it. I mean, Wiki is right there for everybody. You don’t even have to mortgage your house to buy a genetics textbook.

I’m being generous with the 3 Stars because Superhuman was quite fun to read, especially the last third of the book. But Superhuman felt amateurish and the material deserved better.

Ice Force by Matt Lynn
My rating: 3 of 5 stars

Don’t you hate it when you can’t look past a minor flaw? It’s like Tom Cruise with Scientology, Jim Carey dating Jenny McCarthy, Liam Neeson appearing in that woeful Star Wars film and babies with their lack of personal hygiene. If it wasn’t for these minor flaws you could really enjoy what is before you, especially if you didn’t get sick of Jim Carey years ago.

There is a lot to like about Matt Lynn’s Ice Force, especially if you like the “real operation” styled thrillers that Chris Ryan and Andy McNab write. Matt differs from the others in this style with his humorous banter between the characters, something I really like to see in novels, something I am trying to do with my own writing. So what is it that I’m hung up on? The misogyny.

Now, I’m not saying that this book and the writer are misogynistic, rather I’m saying that there is a tone stated by some of the characters that women aren’t good at soldiering, that they distract men from the soldiering and that they are generally just eye candy. This is typical bloke-y fare that you get with the military and men talking at the pub who hate to admit that they are not in charge in their relationship. It may be “real” but I really don’t like reading it.

It reminds me of a cartoon:

So, this was a great thriller, but points off for marginalising women.