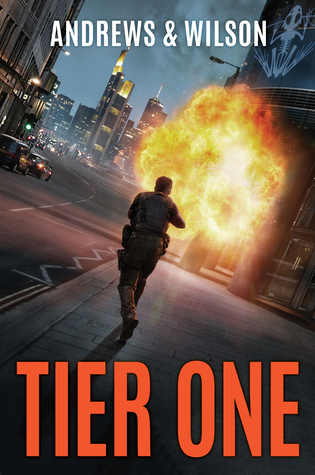 Tier One by Brian Andrews
My rating: 3 of 5 stars

If an operator isn’t wearing 5.11 Tactical clothing are they really an operator?

Tier One are the elite SEAL Team on the black side of ops. They are too good for their own good, as they manage to piss off the wrong terrorists: the kind that hold an explosive grudge. Now former Tier One SEAL, Jack Kemper, must become intelligence operative John Dempsey and take out the terrorists before they strike again.

Brian Andrews and Jeffrey Wilson have created a taught and realistic military thriller in Tier One. Much like other ex-military authors (Chris Ryan and Andy McNab being two of my favourites) they pepper the novel with details and perspectives you just don’t get from other authors. This is both the strength and weakness of the novel.

As much as I found this novel to be an enjoyable and fast paced read, it also overused expository military details, and presented clichéd terrorist characters. For me this held the novel back from being a great novel to merely good. Other readers may find the details interesting, or think that terrorists really can be simply defined as “shitheads” à la Fox News, and enjoy this novel more, but it is still an entertaining read.

NB: Thomas and Mercer provided a review copy for my reading pleasure.

Ice Force by Matt Lynn
My rating: 3 of 5 stars

Don’t you hate it when you can’t look past a minor flaw? It’s like Tom Cruise with Scientology, Jim Carey dating Jenny McCarthy, Liam Neeson appearing in that woeful Star Wars film and babies with their lack of personal hygiene. If it wasn’t for these minor flaws you could really enjoy what is before you, especially if you didn’t get sick of Jim Carey years ago.

There is a lot to like about Matt Lynn’s Ice Force, especially if you like the “real operation” styled thrillers that Chris Ryan and Andy McNab write. Matt differs from the others in this style with his humorous banter between the characters, something I really like to see in novels, something I am trying to do with my own writing. So what is it that I’m hung up on? The misogyny.

Now, I’m not saying that this book and the writer are misogynistic, rather I’m saying that there is a tone stated by some of the characters that women aren’t good at soldiering, that they distract men from the soldiering and that they are generally just eye candy. This is typical bloke-y fare that you get with the military and men talking at the pub who hate to admit that they are not in charge in their relationship. It may be “real” but I really don’t like reading it.

It reminds me of a cartoon:

So, this was a great thriller, but points off for marginalising women.

The Increment by Chris Ryan
My rating: 4 of 5 stars

This is my second Chris Ryan novel and definitely not my last, good 3.5 star book. Chris and Andy McNab are both authors, both ex-SAS, both drawing upon their experience doing this thriller stuff for real. If I had to pick between the two authors, I’d have to say that I didn’t really want to piss either off. Chris is the better writer, but one thing I’ve noted is that both of their novels have an element of luck involved in the protagonist’s success.

I’m guessing the reason for this is down to experience of combat. I’d love to hear from combat vets and their thoughts on this. I suppose being shot at would feel random as to who doesn’t get hit.

This adventure has Matt Browning finding that no-one ever really quits doing work for the intelligence services. The reason for this not getting a 4 star is that the story is a little cliché and somewhat predictable. Still plenty of plot twists to enjoy.