I am waging a war against poor grammar and spelling. Please tell me I’m not alone. Not in a metaphysical, mystical, praise be to his noodliness kind of ‘not alone’, but the ‘you too support that idea’ kind of way.

Whether it be the borderline illiterate retired football player who is now a TV personality, the weather girl whose qualifications in meteorology are limited to blowing hot air, or the poster on any internet site you frequent, we seem to be surrounded by lazy or solecistic. Now I’m aware that language evolves over time. If you have read Robinson Crusoe, published in 1719, you will have noticed how labourous it is to read. Compare this to modern authors, not one would ever use such a long title: The Life and Strange Surprizing Adventures of Robinson Crusoe, of York, Mariner: Who lived Eight and Twenty Years, all alone in an un‐inhabited Island on the Coast of America, near the Mouth of the Great River of Oroonoque; Having been cast on Shore by Shipwreck, wherein all the Men perished but himself. With An Account how he was at last as strangely deliver’d by Pirates. So the English language is bound to evolve, become more concise, more relevant to the people who use it.

But I think there is a difference between evolving and those who butcher the language. I don’t think it is ‘cool’ to use poor diction such as “I is” nor make the constant newsreader error of interchangeably using were and was. This is just lazy and shows that rather than communicate clearly, the culprit is more concerned about being heard.

Rebel I say. Fight the war. Death to the deliberately illiterate. 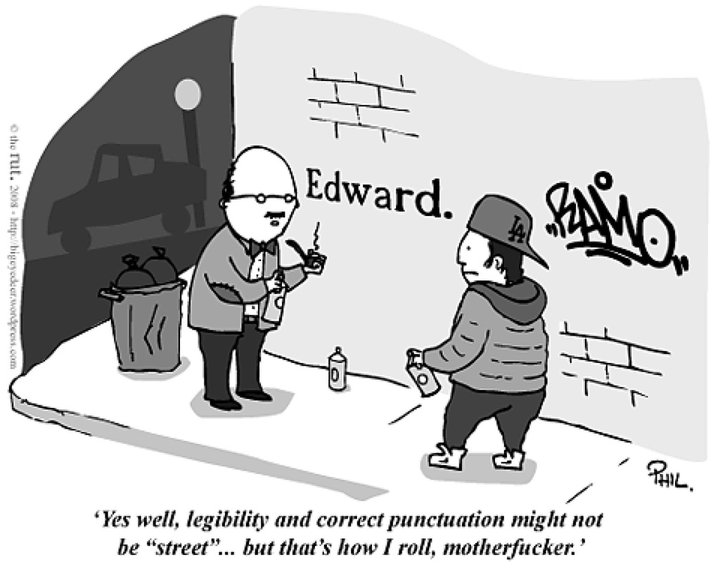 I look forward to having this post edited for hypocrisy.