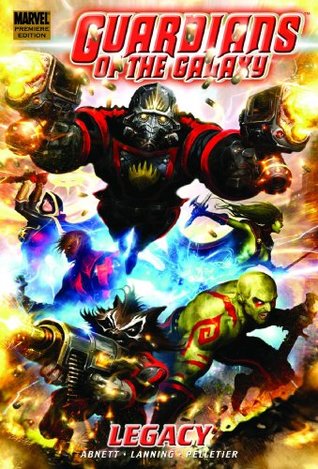 Guardians Of The Galaxy, Vol. 1: Legacy by Dan Abnett
My rating: 3 of 5 stars

My name is Tyson and I am one of those people.

I’ve had Guardians of The Galaxy Volumes 1 and 2 sitting on my TBR list since I heard something about a movie with a talking racoon in it. Any movie that has a talking animal in it falls into only a few categories: kids film, lame comedy film, or worst movie ever. What piqued my interest was the movie hadn’t trodden down the Jar-Jar Binks route and had instead turned in solid gold awesome. To the bookshelf!

Guardians is a very entertaining read. It is action packed, has plenty of humour and has a cast of interesting characters who are meant to be a team, but are always in a state of social flux. They are also fighting against many foes as they try to keep the universe from falling apart or being invaded from other dimensions. They even find time to make jokes about how lame it would be to have an altered timeline plot as they kick off an altered timeline plot.

The thing that held Guardians back from being a four star read for me was the intercut frames. During most action sequences the writers/artists interspersed post-action debriefing scenes. Whilst this did give the humour a place to really dig in, it did also detract from the tension of the action scenes to an extent. Several times I noticed myself rapt with the life-or-death struggle only to have one of the characters talk about it post tense: “That was pretty close.” Now this isn’t that big a deal, since heroes don’t die. Ever. Not permanently at least. So it could be argued that they’ve instead decided to parody or make some jokes about, or around, action scenes. Thus, even my opinion could be swayed up if I were to read this on a different day.

In other words, worth a read, preferably before you see the movie.

One thought on “Book review: Guardians of the Galaxy by Dan Abnett”