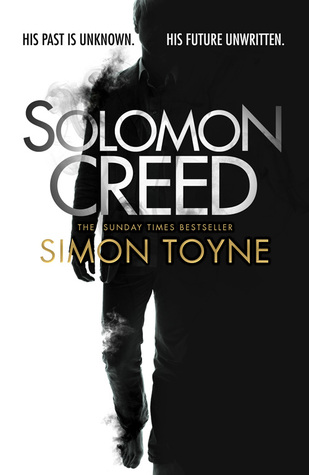 When people have had enough of a white guy as the hero, make them an albino.

Solomon Creed, dressed in a handmade suit sans shoes, is walking into the desert town of Redemption when a plane crashes on the road behind him. And then he’s running away from the fire and into a town of crooked business leaders and cops. Solomon is here to save a man who was just buried. Guess he’ll just have to save the town instead.

When I spotted this novel on my local library shelf I was intrigued. After the opening few chapters, I was strapped in and ready for more. But somewhere along the way, I started noticing things that lowered my enjoyment of this thriller. There is a brisk pace to Toyne’s writing, and that is coupled with short chapters and plenty of action. Though the pacing is oddly coupled with a drawing out of events, and some scenes that feel like diversions from the narrative. For example, the opening fire is still raging until 30% of the way through the novel, which means we don’t really narratively move forward despite plenty occurring.

The other part that didn’t work for me was the final “twist”. While there were hints of the supernatural dropped throughout the novel, the last supernatural elements that tied the plot together and told us who Solomon Creed was (kinda) felt like they weren’t foreshadowed well enough. This could just be me being mean to a novel I was only half enjoying, but it could also be why I was only half enjoying it.

Those comments aside, this is a fast-paced thriller, and it does offer a slightly different take on the Knight Errant or Walking the Earth stories.