Book review: An Introduction to Greek Philosophy by David Roochnik 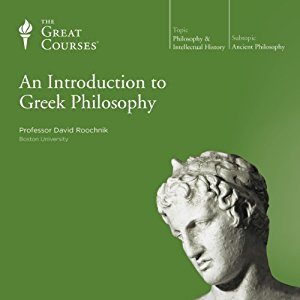 An Introduction to Greek Philosophy by David Roochnik

If Western Philosophy is just footnotes to Plato, does that mean western society is just all Greek to us?

Professor Roochnik presents 24 lectures as an introductory course to Greek Philosophy… as it says in the title. This was quite a good overview of the pre-Socratics, Socrates, Plato, and Aristotle. Like any lecture, insights are given into the further scholarship that can inform a topic – such as how Plato structures his writing so as to make you think rather than tell you what he thinks – and some points are hammered repeatedly for the sleepy students in the back row.

Having recently read The Republic, the insights this book offered would have been handy beforehand. The advantage of having a philosophy professor step you through philosophy rather than just winging it yourself is well worth it. So as a background pre-reading, this is a good place to start.

I was also reminded during one of the earlier chapters of how much knowledge has been lost to history. We have this common misconception about great works rising to the top and being revered through the ages. But the example of the prolific writer Democritus whose works have largely been lost shows us how even recognised intellectual giants can’t be guaranteed their works will be preserved.

One thought on “Book review: An Introduction to Greek Philosophy by David Roochnik”