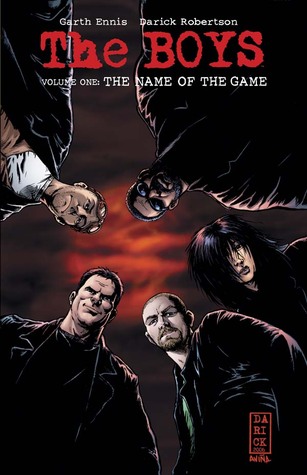 The Boys Omnibus, Volume One by Garth Ennis

The words you don’t want to hear from someone with superpowers: Because I can.

The Boys series by Garth Ennis shows us a world where superheroes are a marketing gimmick for a military-industrial company – Vought America – and these all-powerful beings – such as The Homelander – have to be kept from overindulging in hedonism, vice, and collateral damage. But there is more at stake, as Vought scheme and The Homelander plots.

It was interesting to revisit this series 7 years later as the TV series is set to commence. I remember enjoying the series for its interesting take on superheroes. Much like Irredeemable and Incorruptible, The Boys tries to imagine a more realistic scenario for how people with superpowers would behave. This gives Ennis a chance to pour in his trademark nudity, sex, violence, and toilet humour.

But underneath that facade is a much more interesting story. The Boys team are comprised of trauma victims who (mostly) have interesting story arcs. The superheroes are portrayed in a way that feels much truer to life; especially if you take them as a stand-in for actors, models, rich socialites or the like and the shady stuff we know they get up to. The political and business machinations throughout stands as a cautionary tale. And the series is pretty much one big swipe at the military-industrial complex.

I think I appreciated the depth of this series more on the second read. The Boys is worth reading, especially if you’ve seen other Ennis comics and ever wondered what he really thinks of superheroes.

A quick comment on the TV show: I’m hoping the series is good. From the trailer, it appears they’ll be doing some things a bit differently to the comics, notably The Homelander’s personality and the more prominent corporate criticism. Karl Urban, Antony Starr*, and Elizabeth Shue are great actors, so just their presence should make it worthwhile.

* Antony was the lead in the criminally underappreciated Banshee. If you haven’t watched that series, do so.