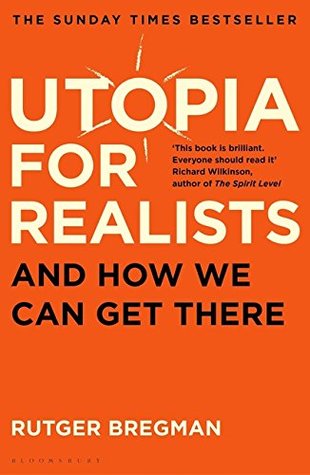 Utopia for Realists: And How We Can Get There by Rutger Bregman

“You can’t pull yourself up by your bootstraps if you have no boots.”

Rutger Bregman’s Utopia for Realists starts with a simple premise: since we are already living in the utopia imagined by previous generations, what’s the utopia we’re aiming for now? We need big ideas to strive toward in order to keep progressing forward.

I have been meaning to read Utopia for Realists for several years now. Prior to the book’s publication, I read the sections Bregman had made available from two of his chapters on Medium. Those were my first introduction to the concept of a Universal Basic Income and how there was some fairly compelling, if limited, evidence for just giving people money to fix just about every problem. Poverty, it seems, isn’t a moral failing or a lack of work ethic, it’s a lack of cash. Since then I have watched several of his interviews and discussions (yes, including the Davos inequality panel) and still managed to gain more insights from his book.

It seems odd to note that we’ve stopped thinking about our future utopia. Outside of Star Trek*, most of our future visions are of dystopias which warn us of our mistakes, but also underline what happens when we stop thinking of a utopia to strive for. We can only see the negative futures, not the potentially great futures.

Bregman spends a lot of Utopia for Realists outlining several of our current societal problems and then introduces some of the evidence for his utopian vision of a Universal Basic Income, lower inequality, and a shorter working week as solutions. These are not new ideas – Mill, Russell, and Keynes have all written on these topics – but they are the utopia that Bregman thinks we need to be aiming for. In outlining the evidence in favour of this vision, he also shows how close we have come on several occasions to implementing some of these reforms and how easy it is for naysayers to win the day.

Utopia for Realists is very well written**, is easy to read, and not particularly long. The only reason I didn’t finish this quickly was that I kept tracking down the extensive references and surrounding literature for further reading. My own fault for being a giant nerd. One of my favourite references was this one on the value created by various professions, which suggests that we are rewarding some who are actively bad for the economy, whilst under-paying those who are good for the economy.

This book is highly recommended reading.

* Although, how much of a utopia is Star Trek, what with the wars, the planet of hats, and Borg collectives? Discussed further here.
** Not sure whether to credit this to Bregman or his translator – Elizabeth Manton.

2 thoughts on “Book review: Utopia for Realists by Rutger Bregman”