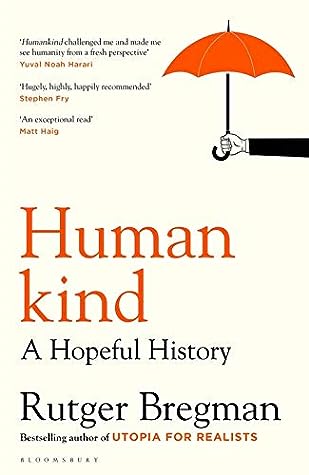 Humankind: A New History of Human Nature: A Hopeful History by Rutger Bregman
My rating: 5 of 5 stars

With Human Kind, Rutger Bregman attempts to debunk an idea that underpins our social and economic systems. At the core of our society is this assumption that everyone is selfish, nasty, and would quite happily murder you, drink your flesh in a protein smoothie, and play with your entrails if it wasn’t for threats of state violence or eternal torment. Bregman addresses what he calls the Rousseau vs Hobbs debate over human nature with the intention of showing Russo was correct and we’re not so bad after all. And since we’re not so bad, maybe we need to rethink all the things we do based on this assumption.

Since I started reading philosophy I’ve slowly been coming to the realisation that society has been built upon what was good for the powerful. These ideas are often in opposition to evidence, morals, and the principle of not being a dick to others.* How can the Hobbsian view of human nature have won? People generally get along just fine. Most of the bad things we experience are from the outliers (sociopaths) or Hanlon’s Razor. Well, the simple answer is that the powerful can use the Hobbsian view to justify their position in society and to perpetuate it.**

Bregman does a pretty good job of tackling some of the common examples and studies used to “prove” how bad people are. One by one, they fall apart as scrutiny is applied to them. While the real-life Lord of the Flies story was the sort of thing that should be the stuff of legend, I found the debunking of the Kitty Genovese murder the most satisfying. They both illustrate how good news and bad news will be highlighted completely differently. This influences our view of the world. We should be careful in that regard.

As an argument, I think Bregman proves his point.

But… There is a bit too much glossing over important points. There are also some contentious assertions, like the idea that Homo-puppy (humans) domesticated itself by selecting for kindness. That isn’t to say these points are wrong, but they are taking quite a few short cuts and artistic flourishes (and Homo-puppy is a pretty cool flourish). One example, the selection for hairless apes as part of domestication is probably not true, or at least more complicated than implied.

Overall, this was an excellent book. I think if we all took these arguments seriously (and did the lateral reading to see how much support it has) then we could make a better world for everyone.

Or we could let the handful of nasty people continue to ruin it for everyone.

* That’s a direct quote from Jesus.
** Or as I put it in my review of Rousseau’s Origins of Inequality: inequality is a way for the rich and powerful to build a moat and castle.

Comments while reading:
Love the bit about the Easter Island insult roughly translating to: the flesh of your mother sticks between my teeth.

There are some interesting points made in pursuit of the argument but they do gloss over a large amount of research. It would be very easy to dismiss the argument if you were so inclined. One example is in his criticisms of Steven Pinker. If I hadn’t already read several papers and articles that dive into how wrong Pinker’s claims have been, then it would be easy to see Bregman as cherry-picking. But then again, you could spend a long time just discussing prehistoric violence studies, which isn’t that exciting for the average reader.

How do you get people to bad things? Well, you need to bully and coerce. But you can’t just give people an order or force them, as they tend to resist. You have to appeal to their good side. They have to believe they are helping, that they are doing it for “the greater good” or because they trust the person asking for their help.
“In fact, people go to great lengths, will suffer great distress, to be good. People got caught up in trying to be good.” (Don Mixon, psychologist who replicated the Milgram experiment.)
“In other words, if you push people hard enough, if you poke and prod, bait and manipulate, many of us are indeed, capable of doing evil. The road to hell is paved with good intentions. But evil doesn’t’ live just beneath the surface; it takes immense effort do draw it out. And most importantly, evil has to be disguised as doing good.”

The Bystander Effect isn’t what we think. “…you can see that in 90 per cent of cases, people help each other out.”
But of course, that doesn’t sell papers or drive outrage media. Good news stories blip, bad news you can fill entire days of coverage with. So they’ll spin a story, or they’ll focus on the exceptions, or they’ll do both.

The comments about education and bullying are interesting. Institutions that utilise hierarchical structures and introduce competitiveness essentially manufacture nastiness and bullying as a result. The book also skipped over something very briefly that is going to start being more important in education circles, and that is how bad testing is (particularly standardised testing). Teaching people to be able to pass a test is not the same thing as education.

The rich and powerful don’t blush. Rising to power essentially turns off your shame (thus you don’t blush) or you rise to power because you’re more likely to be shameless (sociopaths, narcissist, etc). This is why one of the tactics of keeping the powerful inline doesn’t really work. Shaming people with satire, mockery, humour, etc, would work on the average person, but that isn’t the case with the sort of people who feel they are better than us plebs.

Quibble: there is a lot of talk in this book about humans being 99% the same as whatever chimp. I’m a little sick of seeing this misunderstanding. We aren’t really X% similar in the way that implies. A lot of genetic code isn’t for making humans or chimps, it is for making cells, or biological functions, or transcribing proteins. So it fails to understand what DNA does.

In other words, there is a lot of cheerleading around Enlightenment without adequate acknowledgement of the problems and consequences, and discussion of how many things were converging at the same time (there is an argument to be made that a certain level of population density and people with spare time occurred, thus driving forward a large number of things, rather than it being down to a couple of big-name thinky people with invisible hands and justifications for landed gentry merchants being in charge). I mean, most of these ideas were come up with by Ethiopian philosopher Zera Yacob 50-100 years earlier, so there’s that too.

There are a couple of points made about punching Nazis and extremism that showed a want to either distance Bregman’s comments from those “radical lefties” or an attempt to appeal to the “enlightened centrists”. I’m not sure what the thinking was here, but it did show through a few blind spots. For example, Mark Bray’s book on Antifa outlines how punching Nazis is hardly the only thing Antifa do and there is solid reasoning used when it is done (and the march Bregman talked about being used to fundraise efforts at getting people out of the Nazis groups would classify as anti-fascist action, and I wouldn’t be surprised if it were under the banner of Antifa). It also showed a lack of understanding of political and social change. Yes, that much cited study on violence concluded that non-violent movements were more successful… Except that would have to ignore all the violent efforts that made the non-violent efforts possible (because everyone knows that ending Apartheid was all non-violent protest – e.g. rebuttal here).

Other reviews:
https://www.ncbi.nlm.nih.gov/pmc/articles/PMC7470881/
https://www.theguardian.com/books/2020/may/12/humankind-a-hopeful-history-by-rutger-bregman-review
https://www.theguardian.com/books/2020/jun/10/humankind-by-rutger-bregman-review-a-hopeful-history-of-our-nature (This one is a somewhat critical review that I feel makes a couple of good points – like the parking over the bike lane – but also either skimmed the book or really loves to be black and white about things in a way Bregman wasn’t)