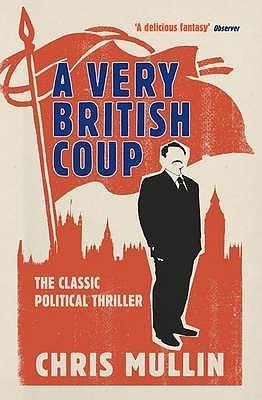 A Very British Coup by Chris Mullin
My rating: 5 of 5 stars

Against all pundit expectations, Harry Perkins wins the UK election with his lefty policies. As soon as his government takes office the populace celebrates while the rich and powerful start plotting his downfall. The rich owners of the media lead a smear campaign. The landed gentry in positions of influence and those wishing to win titles with their appropriate service in the public sector undermine Perkins at every turn. And the UK allies, like the US, try to block the removal of bases and nuclear warheads with their extensive network of spies and monetary power. Can Harry and his government survive this Very British Coup?

I really enjoyed this book.

A Very British Coup popped onto my radar after the rise of Jeremy Corbyn in the UK. In this revised edition, Chris Mullin had added a foreword discussing the revised interest in the novel and the Corbyn link. One point he made was quoting from an article written by a recently retired head of the security services (MI5). The quote revealed that Mullin’s plot wasn’t far fetched at all. And given this novel was based on rumours that the security services had undermined a lefty government in the 70s (not to mention something similar happening in my home country of Australia), it appears this book is on the money.

That isn’t to say this is a perfect book. I found the writing, whilst fast-paced, a bit flat. I’m not sure if that is the same for the characters, as I watched the mini-series before reading the book, so it is hard to tell how much I imported the actor’s characterisations. But it is fair to say that this Very British Coup will ring true for anyone watching global north countries’ politics closely.

Give it a read and then sceptically eye those media headlines and scandals.

Comments while reading:
Intro to the new version makes reference to an article written by the former head of MI5 saying that Jeremy Corbyn was evil and would have been targeted by them. So, let’s dive into this totally fictional book….

Sorry about the potato resolution quality of the video, but it is the only version I’ve seen available anywhere.